Bug A Salt and Terminal Ballistics

So I have a Bug-A-Salt and I LOVE it. Its been a great stress reliever to go on a quick hunting trip in the day. Still I was a bit surprised after seeing videos like this at the terminal performance of the Bug-A-Salt

Now the sights on this thing are GARBAGE, its a V rear-notch that only protrudes when the action is cocked and a V FRONT NOTCH. Still I find I’m VERY accurate at the very short ranges this gun is effective at. We’re really talking inside 3 feet. Which is a VERY short effective range, but when shooting flies that small reach is enough to get close enough to consistently shoot the bug without spooking it.

Still some of my hits have been HEARTBREAKING! I’ll shoot the bug only to see it fly away, or worse yet, see it roll over, and as I’m preparing a 2nd shot the bug “recovers” and flies off.

Further I’ve pumped a TON of shots into a single fly and still had the bug crawling around. Inspection found that indeed the shots were connecting AND penetrating softer insects like flies and ants. Bugs with thicker shells like beetles, bees, and wasps don’t have even remotely the same results. I have yet to shoot and recover a wasp.

Still being a biologist this got me thinking of terminal ballistics and “Stopping Power” that is generally discussed in terms of firearms, and mammals or birds. Hunting vs Self-defense is irrelevant.

Well insects are a LOT different than mammals and birds, the big one being the circulatory system: Insects don’t have veins or arteries, but they do have circulatory systems. When blood is moved without the aid of vessels, the organism has an open circulatory system. Insect blood, properly called hemolymph, flows freely through the body cavity and makes direct contact with organs and tissues.

A single blood vessel runs along the dorsal side of the insect, from the head to the abdomen. In the abdomen, the vessel divides into chambers and functions as the insect heart (14). Perforations in the heart wall, called ostia, allow hemolymph to enter the chambers from the body cavity. Muscle contractions push the hemolymph from one chamber to the next, moving it forward toward the thorax and head.In the thorax, the blood vessel is not chambered. Like an aorta (7), the vessel simply directs the flow of hemolymph to the head.

Insect blood is only about 10% hemocytes (blood cells); most of the hemolymph is watery plasma. The insect circulation system does not carry oxygen, so the blood does not contain red blood cells as ours does. Hemolymph is usually green or yellow in color.

So #1 insects don’t really have what we consider blood pressure, as their heart-like aorta works more like a fan circulating air in a room, than a vertebrate’s pump-like heart that actually circulates the blood through a pressurized system.

This means the big stopping power in most hunting and defensive shots, the catastrophic loss of blood pressure. Also since the blood is not the primary oxygen delivery system, hypoxia to the brain will also not be caused by a ballistic penetration. FYI Insects breath through a passive trachea system.

So what does this mean for Bug-A-Salt hunters? Just because your fly got hit, doesn’t mean you don’t have a kill. A puncture to the exoskeleton will likely be fatal…just maybe not within the hour. Further even a single grain of salt is a big deal on a small fly, so poisoning via salt is also a possibility.

Another thing to note about the Bug-A-Salt is the muzzle velocity is VERY slow, this means that a bug hit may be able to recoil with the impact enough to prevent ballistic penetration. So shooting a bug on the wing is overall ineffective, as is shooting an insect parallel with the landing surface. Better to shoot into the surface the insect is on to get the most penetration of salt.

I also like using granulated salt over the larger kosher salt, as the smaller grains seem to penetrate much better.

**UPDATE** Did some more hunting and got some really good kills after penning this. Click over to see the end result: 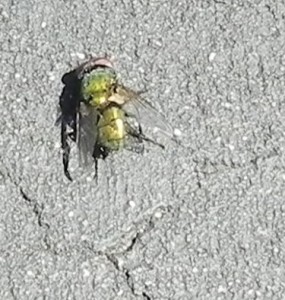 This guy is in the final stages of life. I pegged him twice with the Bug-A-Salt. The first one took one of his wings out completely and penetrated the thorax, the second added more holes to the thorax and abdomen.

This guy was a more interesting shot. I hit him and damaged his wing muscles/wings but not enough for him to NOT fly away. Still he didn’t make it very far before he had to land. I was able to get a follow-up shot into him, but he was still making VERY short flights. The 3rd shot grounded him.

Again you can see where the salt penetrated the exoskeleton.

Both flies were dead inside of 20 minuets, and then were dragged off by the ants…some of whom were also felled by the salt-gun.

Last I found this leaf that I had pattern tested a few months ago. Neat to see what the salt did to the leaf over time:

So its a VERY cool gun, but won’t perform like a full-size shotgun on full-sized game just from the nature of biology!

This entry was posted in Biology, Guns, product review. Bookmark the permalink.

20 Responses to Bug A Salt and Terminal Ballistics