CSGV has a impressively ignorant and misleading press release.

Washington, D.C.—There can be no doubt after the Not Guilty verdict in the trial of George Zimmerman that murder has now been legalized in half of the 50 states.

The traditional presumption in the law—from the advent of the Hebrew Bible through the creation of Roman law, English common law, and American law—has been that if you could spare human life, it was incumbent upon you to do so. With the “Stand Your Ground” law, the National Rifle Association (NRA) and its partners in the American Legislative Exchange Council (ALEC) have turned 3,000 years of jurisprudence on its head. Now you can provoke a fight, and if losing that fight, kill the person you attacked.

Wow, its a shame that CSGV’s goons weren’t on the prosecution team, given that they can PROVE facts that the state of Florida was unable to do! Also if “Murder is Legalized”, why was there even a trial? Also I love how all the anti-freedom goons are talking about “Stand Your Ground” when that law has NOTHING to do with this case. Hint, there is no “Duty to Retreat” when your head is being bashed into the pavement.

Turning the other cheek is supposed to be a sacred virtue. But by removing the duty to retreat from a confrontation in public when one can safely do so, the “Stand Your Ground” law allowed George Zimmerman to stalk and kill an unarmed teenager and walk away a free man. That’s a tragedy, because there can be no doubt that Zimmerman could have avoided a confrontation with Trayvon Martin on the evening of February 26, 2012.

But what about Martin? Its hard to “stalk” somebody you’ve lost sight of…and why didn’t Martin just run home? Hey, but the man with the gun is ALWAYS guilty, right?

The NRA’s law represents a dangerous and unprecedented escalation in the use of force in the public space, allowing individuals to kill when they merely fear “great bodily harm” (i.e., a fistfight, shoving match, etc.). The concept of responding with proportional force has been obliterated. In this case, the “harm” done to Zimmerman, by whatever source, was so minor that EMTs didn’t even offer him treatment minutes after the shooting.

“Proportional force” is laws for crappy nations who don’t have self-defense laws. If you like that so much, go there! Also CSGV didn’t read the arrest report where Sanford Fire did indeed render first aid to Mr. Zimmerman.

Americans should also question why Zimmerman was allowed to carry a loaded gun in public in the first place. He has been previously arrested for assaulting a police officer and placed under a restraining order for a domestic battery involving a former fiancee. Again, Zimmerman had the NRA to thank. Their “Shall Issue” law in Florida awards concealed carry permits to individuals with minimal screening/training and removes any discretion law enforcement might have in approving applicants.

All events in question had been cleared from Mr. Zimmerman’s record. I guess “Guilty until proven innocent” is how CSGV likes to roll. So much for them respecting law and the constitution.

The message to would-be killers is now clear. You need not fear carrying your gun in public, or using it. If you do, just make sure you are the only one remaining to testify about the nature of the confrontation in question.

Uh, huh. Hence why Zimmerman was embroiled in a massive court case, and only felt the need to fire one shot.

As much as the gruesome mass shooting at Sandy Hook Elementary, the acquittal of George Zimmerman is confirmation that the American promise of “Life, Liberty and the pursuit of Happiness” will continue to be squandered until the NRA’s pernicious stranglehold on our legislatures is broken. Lawmakers in states with “Stand Your Ground” laws should immediately repeal these cancerous blights on American values, law and tradition.

So says the people with zero respect for the US Constitution or the right of law. George Zimmerman has been acquitted, but CSGV both considers him guilty AND cites “Life, Liberty and the pursuit of Happiness”.

All irony lost on these bunch of anti-freedom goons! 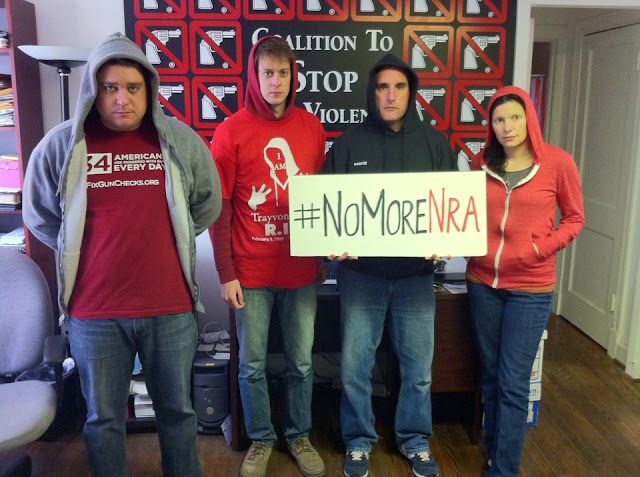 11 Responses to CSGV: Ignorace and Racism