Internet Censorship has gone TOO FAR

So one thing I’m VERY upset with modern politics is there appears to be a cabal of wealthy powerful people, mostly men, who can sexually assault people, especially minor children without question.
Is this the Q-Anon some people are talking about? I don’t know.
What I do know is that people KNEW Harvey Weinstein was a sexual Predator for DECADES, and only recently did people take any action. Bill Clinton had several allegations of rape before he even took office, and based on my understanding of modern Consent (that were being formed in the days when Clinton was President) his sexual relationship with Monica Lewinski was non-consensual. Kevin Spacey was known for years to be a pedophile, and only recently has that been discussed openly.
Of course we have Jeffery Epstein who was only a name you heard about in far-right-wing channels until he became national news. It was well-known he was a pedophile, and he had even been charged, convicted, and “Sentenced” for it. Of course the Sentence was served at his home with minimal supervision. It was also well-known he wasn’t just a predator, but a pimp of under-age girls (and allegedly boys for above-mentioned Mr. Spacey), to the rich and powerful.
After his second arrest, he died in mysterious circumstances, and the alleged photos and video-tapes of his clientele, I assume for blackmail, have never surfaced.

Now of course the sex offender I want to talk about now is our President Joe Biden. Not only are there allegations of sexual assault, as well as reports of inappropriate behavior towards female members of his Secret Service Detail, BUT ACTUAL VIDEO EVIDENCE OF BIDEN TOUCHING CHILDREN IN INAPPROPRIATE WAYS.

Note this video I found by a VERY specific search term, and even then I had to scroll through three pages of videos of Main Stream Media talking about how allegations of Biden’s Pedophilia are false.

I posted this video on Facebook, and look what I get! 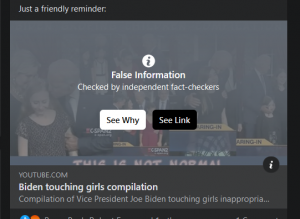 FALSE INFORMATION????? This is NOTHING but clips from CSPAN, there isn’t even a voice-over! What is false about this?
This is the reason THEY give

There is no credible evidence that supports this claim. In Joe Biden’s more than 40 years of public life, we could find no news reports, formal accusations, complaints, arrests or investigations that implicate him in any sort of sex crimes involving kids.

Who are you going to believe? Facebook and Politifact, or your lying eyes???

Even scarier is there was another video where the Then-Vice-Preisdent was openly groping the breasts of a pre-teen girl repeatedly, and that video is totally gone.

This is too far! Not only is is garbage, and partisan, but it’s protecting sexual assault against children, and I’m fucking pissed about it!

3 Responses to Internet Censorship has gone TOO FAR