A man is dead and a woman injured after a stabbing in Richfield today. The two are related to each another, police said.

Police were called to a double stabbing in the 7000 block of Elliot Avenue S. at 11:55 a.m. A man was dead at the scene and a woman was transported to the Hennepin County Medical Center with non-life threatening stab wounds.

Another man was found at HCMC with stab wounds that were also not life threatening, police said. The third victim, though related to one of the Richfield stabbing victims, was stabbed in Minneapolis the previous night, police said.

Of course the knife is one of the first tools ever used by man, and even those first knives were used for murder. We can ban all the guns, and we’ll still have violence, we’ve always had violence.

If somebody comes at me with a knife, I’ll be putting a “Gun Death” onto the boards if that’s what it takes. Not that “Gun Death” matters much.

There will be no vigil for these people. 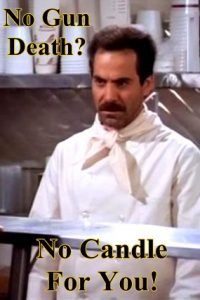