This little bit got me giggling:

<+Awelowynt_work> I’ve been staring at pictures of WEERD all night.

[05:21] <+Awelowynt_work> Turns out that extra inch makes all the difference in the world.

Well the pictures he’s been looking at are here 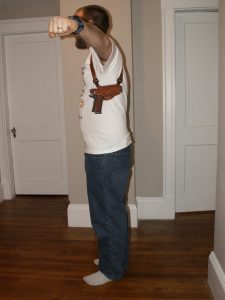 Awelowynt got himself a shoulder holster, and while he’s a thinner guy than I am, and while my 1911 is a Commander with a 4.24″ barrel, he’s been attempting to conceal a 5″ gun in a similar rig.

When you’re carrying guns size DOES matter, tho not all dimensions are equal! In this carry rig the overall height of the gun isn’t as important as the overall length. So while I need a shorter 1911 (and honestly a gun with a 4″ barrel would probably carry a bit better), but as you can see I’m even carrying Wilson Combat 8-round magazines that extend a bit from the base of the gun, because the added length isn’t an issue, even with a full-size grip on a 1911.

Meanwhile if you carry in an IWB rig, the barrel is down your pants, so unless the gun you’re carrying is REALLY long, length doesn’t matter, but the grip is hanging out over your belt, and a longer grip is harder to conceal than a shorter grip. Because IWB carry is VERY popular these days, and 1911s are still as popular as they ever were, this is why so many gun makers are making “Colt CCO” pattern guns, which are officer sized guns, but with a 4.25″ barrel, so you have a longer barrel and a shorter grip.

And of course with my holster what conceals the gun is the width of my chest. For a thinner guy they need a smaller gun, for a bigger guy he can hide more. Also for women with breasts this can be an advantage.

Still many people carry at the 4:00 position (or even a bit further back behind the kidney) because it still allows for a natural strong-side draw, but now your back is doing much of the hiding, and it is one of the widest parts of the human body.

Good luck on finding the right gun and carry rig for all who are looking, and carry your guns, you never know when you might need them!