Images of the Antis: Dicks

So Joe posted this image for his Markley’s Monday series: 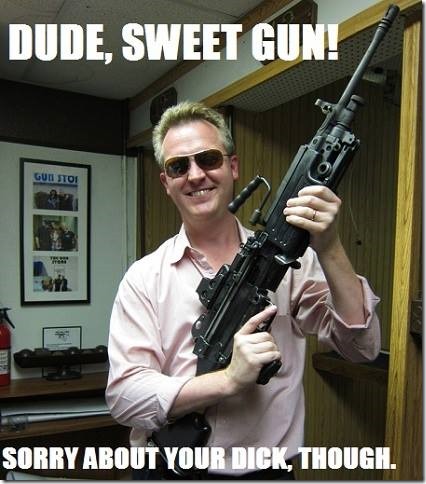 So yeah the first thing I saw was it was a SAW of some sort (I’m honestly not big on the belt-feds, so this could be a 5.56 M249 or the 7.62 M240, I don’t know, and don’t care enough to look it up), I looked at it for a moment to see if it was one of the new uber-expensive semi-auto variants I’d been hearing about, but gave up at that.

Next thing I saw was the wedding band on his left hand.

Think about that. “Sorry About Your Dick!” to a man who’s married. Chances are he’s married to a woman, but possibly a Man in these days (and double-income no-kids Gays certainly would have the scratch to buy an expensive rifle/Machine Gun), I suspect no matter how big or functional his dick is, whoever is wearing the other ring in that pair seemed to like it enough to enter into a binding contract, such is marriage.

Also it could be this dude’s wang is totally busted! Bad artieral flow, tumors, trauma, and nope that dick is just for pissing and pissing alone. It fucking happens, and sometimes even Viagra won’t help.

And for those poor souls, and my heart goes out to them, LIFE GOES ON! Yep, fucking is awesome, but it’s hardly the ONLY awesome thing. You know, shooting guns is also awesome. Playing catch in the yard with your kids. Building furniture with your bare hands. Fixing broken stuff you bought on craig’s list….selling said broken stuff for a profit!

No matter what the status of this dude’s dick is (and let’s face it, it’s probably just fine) his wife or husband doesn’t seem to care.

Oh and then I noticed he had an Eotech sight on the gun…cool gun dude! Sorry the antis can’t focus on the sweet gun for 10 seconds before looking at your package.