Images of the Antis: Guns and Suicide

**UPDATE** Please stay to the end to read the update below, it blows everything I wrote out of the water!

So the antis have been debating us for too long to not know that of the roughly 33,000 “Gun Deaths” in America every year, 60-70% of those “Gun Deaths” are suicides, the the bulk of these suicides are older adults. They know that background check laws, safe storage laws, magazine bans, gun bans, and any other anti-gun boilerplate isn’t relevant to this issue.

But they NEED dead bodies, their entire agenda is contingent on dead bodies! So they try to conflate that guns cause suicide, and we get this graphic from Bloomberg’s web mouthpiece The Trace. 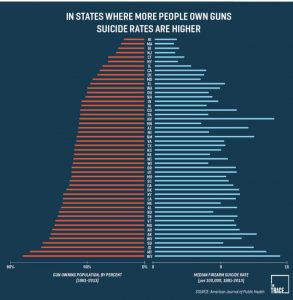 Ok so first lets just LOOK at the graph! A very nice curve on one side (It should be, they arranged the states intentionally in order) and a raggity mess on the other side! OK, yes the graph is VAGUELY symmetrical….but boy that’s some messy Data! It’s nothing but outliers! There are a TON of states that fall into the “High Gun Ownership” group (especially when you notice that the curve is REALLY flat in the middle…lots of states have very similar gun ownership rates) but have relatively low “Gun Suicide”, Places like The Dakotas, Maine, Minnesota, Wisconsin, and Michigan, among others. Why do they have such a low “Gun Suicide Rate” yet have relatively high gun ownership rates? Also look up at the top! Ok Hawaii is fucking HORRIBLE to gun owners, so those numbers are understandably low, and their Suicide rate is low. No shit, its a fucking tropical Island! You feel depressed, smoke some legal weed and go sit on the beach and watch the waves, maybe eat a fresh coconut!

But look at Connecticut and New York, both anti-gun states, and their “Gun Ownership” numbers look approximately the same, but Connecticut has a much higher Suicide rate than New York which is right next door.

And while Massachusetts has the lowest “Gun Suicide” rate, and by my math is the most gun unfriendly state in the country, California is a close Second, and Illinois is in 3rd, those states have a much higher “Gun Suicide” rate….why?

Of course no explanation is given to these wild numbers.

Also how did they get these numbers in the first place? I looked at the references from the cited journal article but I can’t find a clear-cut source on how they determined the “Gun Ownership” number. Further I have some questions about the suicide numbers. So there’s a big spike in Florida, it makes sense, it’s relatively friendly to gun owners, and its a haven for retired persons…which happens to be a huge percentage of the suicides in America. It makes sense, lots of 65+ People and no onerous gun laws you’ll see a higher rate of suicide.

But what about Nevada? I’ve heard, but I don’t have a reference to cite, that Nevada has lots of suicides from tourists. People losing all their money in the casinos, and people having one last hurrah and living it up before punching out. Also there are lots of shooting ranges in Nevada that cater to tourists from gun unfriendly areas, I wouldn’t be surprised if there were more suicides with rental guns from people who planned a last vacation. So are those “Gun Suicides” all from the gun owners in the corresponding categories?

What about when your local drug dealer offs himself rather than going back to prison? Is owning a stolen gun counted as “Gun Ownership”? Certainly the suicide still counts.

And then there’s the numbers themselves. Look, Gun ownership is in Percent (per 100 for those who don’t speak Latin) and the suicide is per 100,000!

Think about that! Even if Bloomberg had a perfect 1-to-1 ratio (which he doesn’t) that would mean that firearms only CAUSE suicide in 1% of those who own them. Given that this data set is VERY questionable both on its correlation between guns and “Gun Suicides” and its methods of just determining these numbers, a 1% correlation would still likely be statistically insignificant to draw any conclusions on. And they don’t have even those worthless numbers in the first place.

Also the data is further garbage because the overall implication is that SUICIDE is bad, not just “Gun Suicide”. This is the whole point to the “Gun Death” unit, it’s an artificial variable that is implied to be a number we all think about. Lower “Gun Death” is applied to mean it has a lower death rate in general, same here with this “Gun Suicide” number, it implies that a low “Gun Suicide” number is a low suicide number.

That isn’t the case. Doing a quick look, but not running a statistical analyses there is a correlation in those numbers, but hardly a clean one. The bottom line is while nation-wide 50% of the suicides are by firearm, in places like Massachusetts with the lowest “Gun Suicide” rate that isn’t the case (PDF)

Firearms were only used in 24% of the suicide deaths by males, and 11% by Females. That’s a MASSIVE deviation from the national numbers, so while Massachusetts is below average in Suicide numbers in total, this data does point out that suicide will be replaced by another method if a gun is not available.

So their overall implication is that if we reduce the number of guns in civilian hands we will reduce suicide, and that just isn’t true. Also when you note that they are pushing for reduction in gun ownership numbers, while they heap high praise on Australia and the UK, we can guess what their proposed methods might be.

**UPDATE** Ok, I hadn’t read the whole study Bloomberg referenced, and boy I should have before I put pen to paper! This is from the Methods of the study I linked above:

So get that? They are looking at the correlation of gun ownership rates and “gun suicide”, and they determine gun ownership by the number of gun suicides the state has! This isn’t a study variable, it’s a positive feedback loop! It’s almost amazing that the graph above isn’t perfectly symetrical!

This entry was posted in Gun Death?, Guns, Politics. Bookmark the permalink.

2 Responses to Images of the Antis: Guns and Suicide