A Tinfoil Hat Made Out of Copper 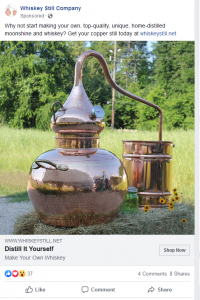 So for those that don’t know, since the Volstead Act Distilling spirits has been illegal. When the 21st Amendment was added to the Constitution the ATF (Which was created to catch bootleggers illegally selling alcohol) started taxing producers by requiring licenses.

Now I have a C&R FFL, which allows me as a collector to have some of the powers of a commercial FFL, and of course lots of limitations so that I’m not acting like a gun shop without having the proper license. It’s also totally ok for you to ferment your own beer, wine, mead, ect at home so long as its for your own personal use and never for sale.

But I really don’t drink much beer or wine, I like spirits, is there a license where I could buy a modest copper pot still like that one and turn home made beer into whiskey, or wine into brandy?

As a matter of fact it is ILLEGAL to have a still in a residential area (I’m not sure if it’s mere possession of the still, or is it operation….knowing the ATF I suspect it’s possession) so if you want to pay for a commercial license you need to establish that distillery in a commercially zoned area. So even if I wanted to dump the cash for a full license…..either FFL or for distilling, I can’t unless I open a commercial property.

Furthermore their FAQ has NO information about this!

I think what puts a bow on it is this line:

Maybe I’m paranoid now. Yeah, even a small pot still won’t fit in a PO Box…..but it’s also not the place to send the ATF SWAT team to arrest you. Is this just an elaborate Sting?

I’m not taking the bait.

Either this is a MUCH more targeted STING than a simple Phishing Trap, or the guy in the video is documenting his felonies and ignorance of the law for all to see.

This entry was posted in Freedom, Politics, Technology. Bookmark the permalink.

9 Responses to A Tinfoil Hat Made Out of Copper