Fixing up an Old Cast Iron

If you price out cast iron cookware you’ll find even the cheap stuff is 2-10x the price of a similar non-stick skillet.     BUT if you go to yardsales,  antique shops, and thrift shops, you can find some pieces that have fallen out of love.

I grabbed this one at a local thrift store,  you can see the tag was $8.99…..and since I gave them some old clothes and puzzles my wife had finished so I got a discount! 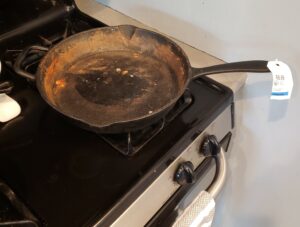 As you can see,  it has fallen on hard times.   The brand is “Delmonico’s”    I can’t find much about this brand online,  but I assume its relatively new,  and the rust is VERY superficial.    Still when I saw this pan there was a woman right in front of me….she looked at it, and I THOUGHT she might take it,  but she passed,  because most people will think this is a lost cause, and it is VERY far from it.

So first up I’ll defer to Kent Rollins because he has more experience than me.

So this one has the newer feel to the cook surface, it’s SLIGHTLY pebbly, it feels a little bit like fine leather rather than the hood of a car. I didn’t take any effort to smooth out the surface, I might change my mind, we’ll see. I DO know you can take it too far

Still step one is to get this pan down to bare metal so I can get that rust off, and make sure it has a proper seasoning. Clearly the last owner did NOT love it the right way, so I don’t trust ANYTHING on this pan. My preferred method is to toss it in the oven and run a cleaning cycle. This gets the oven SCREAMING hot for a long time. My oven goes up to 550 degrees, and I suspect cleaning is hotter than that. After the cleaning cycle this is what you have. 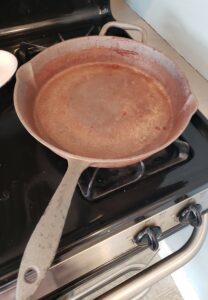 Note that dull grey color. That’s the bare Iron. Since it isn’t stainless it IMMEDIATELY starts to rust, but that rust layer, as well as the rust that was already on the pan is now VERY loose. Once it’s cooled so that water doesn’t boil off the surface of it, you can hit it with soap and water and scrubbing pads. I even took some steel wool to it just to get off as much of the ash and rust. This is the ONE time when it’s GOOD to use soap on cast iron.

Once it’s clean I hit it with some white vinegar to inhibit rust, rinsed it with water, then put it on the burner to heat-dry it. with the iron dry, I used a rag to coat it with a generous quantity of oil, and put it back in the oven, this time set to 400 degrees. Remember cover EVERYTHING with oil. Top, bottom, sides, and handles. You can use any edible oil or grease. I used canola, but you could use lard, shortening, avocado oil, peanut oil. Just ideally something with a high smoke point. 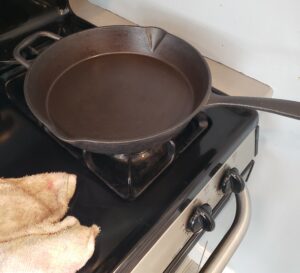 For this step I like to put a baking sheet under it, and put the pan in upside down so that excess oil can drip off the cooking surface. I let the pan bake for about 45-min to an hour. Then I take it out and re-season it. I like to do this at LEAST three times, but today I did it four. 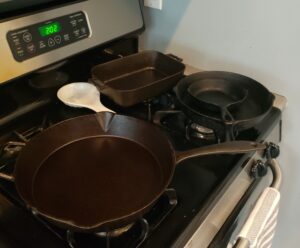 There’s the family. The two other skillets are heirlooms. The 10″ belonged to my Wife’s Grand Mother, and very possibly her Great Grandmother, the 4″ belonged to the mother of a family friend. The fried passed away last year and he was in his mid 90s, so I’m fairly confident both skillets are over 100 years old. The square pan I got at the same thrift store for IIRC $7, and it, like the two skillets aren’t branded, so it also might be quite old. The 12″ Delmonico is likely much newer, but it should last just as long, it’s nice and heavy. You’ll note the more bronze color on the Delmonico, that’s simply because the seasoning is new. As I cook on it it’ll darken to the jet-black of the others (Actually the square pan has only been used a few times since I seasoned it, so it’s also a little ruddy still). While it has this gold color I won’t cook anything acidic (like tomatoes or fruit) or anything you cook on a dry skillet like flatbreads, at least until that coating is a little thicker and harder.
I plan on cooking a steak on it tonight!

Hope you found this fun and interesting, and let me know if you’ve saved some old Iron that was orphaned!