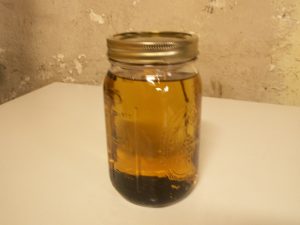 That tharr is black pepper mixed with 750 ml of Three Olives vodka. My last batch of Bacon vodka (which was a horrid mixture of success and failure) had a bit too much pepper in it. I’m going to omit pepper entirely from the next batch in hopes to clean up the bacon flavor. That being said the pepper flavor that is imparted to vodka is quite amazing, it is not exactly what say ground pepper tastes like, it seems to have a lot less of the earthy flavors and more of the light vegital flavors, but still with that simmering heat of black pepper.

It was quite tasty and totally killer in Martinis, so I’m gonna make a batch of it an see how it rolls.

I was originally planning to let this batch infuse for two weeks, but look at how dark it is! I’m worried at the end of two weeks I’ll have peppery paint-thinner on my hands. Now my plan is to crack the jar next week and sample it and see if its time to filter.

I must say infusing my own vodka is lots of fun! Had some lychee vodka this evening and its very good.

Can’t wait until this batch is ready!