OK so Guffaw said to the last drink

I could argue the point…or I could mix another drink. What do you think I chose? 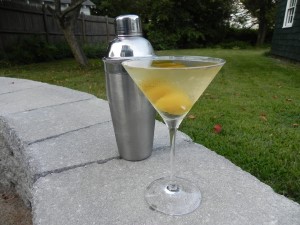 This one harks back to the very beginning of Flemming’s writing career, Casino Royale. In the book Bond orders a drink:

“Just a moment. Three measures of Gordon’s, one of vodka, half a measure of Kina Lillet. Shake it very well until it’s ice-cold, then add a large thin slice of lemon peel. Got it?”

“Certainly, monsieur.” The barman seemed pleased with the idea.

Bond laughed. “When I’m…er…concentrating,” he explained, “I never have more than one drink before dinner. But I do like that one to be large and very strong and very cold and very well-made. I hate small portions of anything, particularly when they taste bad. This drink’s my own invention. I’m going to patent it when I can think of a good name.”

The name he chose is the Vesper Martini, what I’m drinking is a little different. First up Kina Lillet doesn’t exist so I substitute Lillet Blanc, further the mixture of gin and vodka seems a bit frivolous to me, so I substitute New Amsterdam Gin as it is much milder in flavor than my usual Tanqueray so it has similar characteristics of gin thinned with vodka.

Also since the lemon peel is little more than a garnish I throw in some pieces of pickled lemon. The brine adds some saltiness to the drink which I prefer in a Martini, and it also softens and mellows out the rind and flesh making them quite pleasant to eat.

Its much milder than the more robust Dry Martini in flavor, making it a great choice for those looking to dip their toe into the deep water of Martinis.

Also I thought about shaking this martini to demonstrate what shaking does to a martini, but I decided against that little bit of cocktail masochism and instead allowed the fixings to sit quietly with the ice and then after a few quick swirls to integrate I strained it into my chilled glass.

The clouding on the glass is simply condensation from the evening humidity, but the drink is crystal clear and smooth as silk. There’s nothing wrong with a shaken martini, but I prefer my martinis to have as little agitation as possible while it chills.

Oh and for a deep cut for Bond fans I just found 007’s first film appearance, albeit on the small screen rather than the big screen. Casino Royal from Climax! a full eight years before the world was treated to Dr. No on the silver screen! Its horribly twisted for an American TV audience, but its interesting to watch.