Joan dropped a post worthy of my time. Let’s do this!

It turns out, of course, that guns are popular gifts. Not being into guns like that, I have a hard time thinking about a gun as a gift. My experience with guns is that of hunting and then losing a loved one to a bullet. So the idea that someone would be really happy about getting a gun for Christmas just doesn’t fit with my idea of a merry time. But of course, there are many people for whom getting a gun is the ultimate gift. A hunting gun is one thing. If you are into hunting, getting a gun to use for that purpose is likely a good gift. But if the gun is meant for something else, like shooting a person, then the idea of a gun as a gift is a bad one, in my opinion. Guns are dangerous. They are one of the few, if only, products on the market designed to kill a person or animal. That’s why I was both fascinated and concerned about some of the photos that have shown up on social media showing people displaying their new guns or showing children ( and babies) surrounded by guns.

Yep, guns should just be for hunting. This is the BIGGEST wish for an anti-gun lobbyist. Now Joan may say what she wants about hunting, but in America nobody survives off of game meat. Thanks to hunting regulations, even if you WANT to subsist on game meat alone and keep away from farmed meat, you really can’t do it without running afoul of the law. Of course this doubles back to the availability of farm-raised meat in America. Its EVERYWHERE. You simply don’t NEEEEED to hunt animals.

That’s the point. If your reason to own guns is for shooting animals, that right is forfeit, as your reason can simply be boiled down to fun. You see, Joan is right, guns are dangerous, and people indeed to get killed, harmed and preyed upon by guns in the hands of bad and incompetent people. If your ONLY argument is “But they’re fun!” it isn’t much of an argument.

Of course Joan’s objection on owning guns for killing people is EXACTLY WHY we should own guns. Sure some guns are for sport, collecting, and training, but the guns that need to be protected most are for KILLING PEOPLE. You see this is perfectly legal under the law, and if that’s your argument, its rock solid.

Look at the picture she posted: 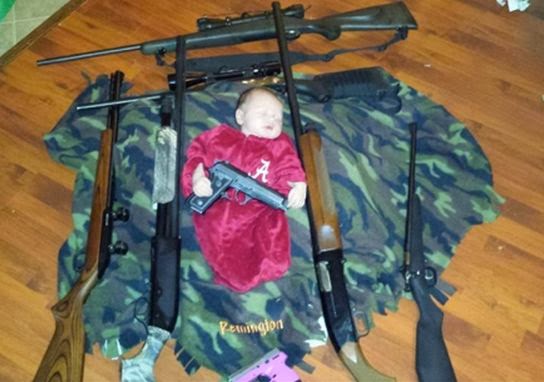 Ironically, most of those guns indeed are sporting guns ideal for hunting and sport shooting, but that pair Taurus guns are for self defense. The baby in the picture is a life worthy of protection. This strikes VERY close to home as that baby could pass for my own. You try and harm my baby, I’ll harm the hell out of you. Joan doesn’t agree with that, and I find that disagreement abhorrent.

I did have to look up the term “chopper” as used by the very young man who is shown displaying a really scary looking gun that is surely not meant for average citizens. Here is what I found at Urban Dictionary (spelling and word usage not mine):

I’m not a fan of that term, as “Chopper” used for guns is a gangster term, originally coined for the Thompson Submachine Gun used by prohibition rum-runners and depression era robbers.

Still I can’t fault it very much as I own a Jennings J22 because it is a proverbial “Saturday Night Special”, which is a racist term used by racist “Progressives” to disarm poor people in order to secure their votes. I own this gun for one reason only…they don’t want me to own it!

I can see using the term “Chopper” the same way. Further with the threat of “Flash Mobs”, and “Occupy” Groups, and other riots, one must consider a time when you might need to disperse a violent mob single-handily as Police might not respond in enough time. Again dispersing a mob that might be a threat to you, or your home is legally justified.

But back to photos, some new information has been released about the Sandy Hook shooting including some photos taken by law enforcement as evidence. So here is proof that Nancy Lanza owned a certificate of completion for an NRA shooting class. The NRA does not like to believe that the mother of the shooter of the country’s most heinous shooting had anything to do with their organization. But the NRA dominates the gun training classes in our country and does train thousands of people every year to shoot their guns. That’s fine but it would be good to know more about these classes. What is taught. How is it taught?

I won’t necessarily question the photo of Nancy Lanza’s NRA membership, as it appears to be police evidence, still the only photos I’ve seen are low-resolution and illegible. The point is overall moot. Still Joan questions NRA safety training, and she does so from an anti-rights platform that is anti-training! There are NO valid training classes in Joan’s book, so she’s against gun owners getting trained. She’s against all gun owners, even her own gun-owning husband!

After the Sandy Hook shooting the NRA famously suggested that it would sponsor gun training classes to teachers, wrongly and cynically claiming that our schools would be safer if only teachers were armed. And of course, the NRA would benefit financially because more teachers would have to go out and buy guns for this purpose. Great idea if you are in the gun industry which is inextricably linked to the NRA. But I digress.

Except the latest School shooting was stopped by an armed school offical. So Joan thinks this was bad?

And then there’s South Carolina Governor Nikki Haley bragging about getting a handgun for Christmas. Really? …The idea that elected officials need to show their love of guns or hunting in campaign photos in order to be elected is ridiculous and sends a false message about the role of guns in America. And if politicians think that cozying up to the NRA gun lobby will get them elected they should rethink.

Well except it IS good for politics. Further Beretta is looking for a new home:

Beretta has eliminated Virginia from its short list of states to move its company because anti-gun Democrat Terry McAuliffe was elected governor….The family owned, 500-year old Italian company has been scouting locations for its Accokeek factory in reaction to Maryland Gov. Martin O’Malley ramming radical gun-control into law last spring.

If Haley’s purchases of a Beretta Px4 can help sway Beretta to relocate to the VERY pro-gun state of South Carolina, not only would it be good for Haley’s political future, it will also be a boon for South Carolina in both Jobs and tax monies.

The message here is: avoid those photos of yourself shooting a gun. They just don’t work and they send the wrong message to a country where gun deaths and injuries total 100,000 a year while politicians do nothing to change the carnage. Take the opposite approach- the common sense approach. Rather than boasting about guns and making ridiculous remarks about what one intends to do with the guns, we should be paying constant attention to what is actually happening in our country.

Yep, stay in the closet! remember, if people know you are a gun owner and a supporter of the Second Amendment you make the job harder! Further the reason for gun ownership is shifting from rural sport shooting to urban and suburban self defense. If you are a gun owner in America today you likely own guns for self defense. Joan HATES that, and if she can’t make you not exist, she’d like to make it easy to deny your existence!

This is really a post of sad flailing to protect a false reality that gun ownership is dying in America. It isn’t, and we’re all safer because of it!