Busy Day for a Little Baby!

So after little LaWeer’da’s morning nap we dressed her up, packed a bag and headed for the TRAIN!

Now she LOVES the train, she loves watching it drive by, and points out the window when she hears it pass…but never had she been ON the train.

Floored. She looked out the window the whole time, and it was just awesome watching her little eyes dart back and forth as she attempted to focus on the images flying past the window.

But that wasn’t the the whole morning, but she would have been happy with just that.

Nope we took this day to take her for her first-of-many trips to the New England Aquarium! 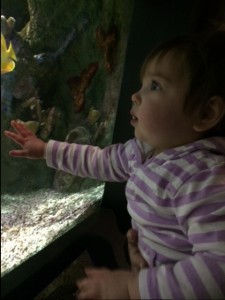 That picture says it all! She was FLOORED by it!

Of course that isn’t the only picture! 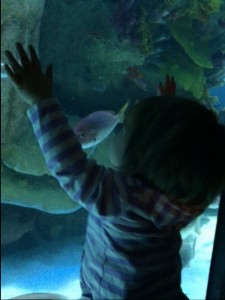 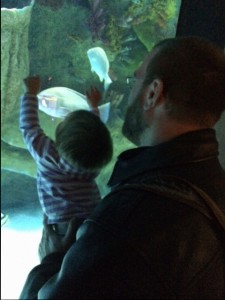 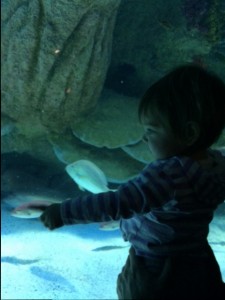 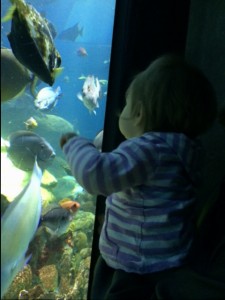 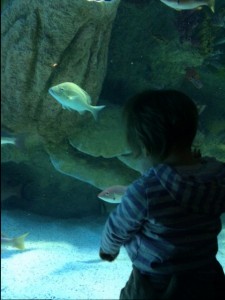 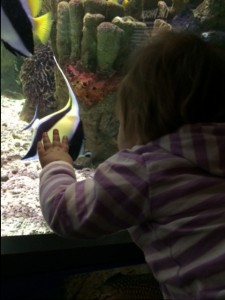 It’s not a huge aquarium, but I’ve been going here since I was a little kid, and now I’m taking my own daughter to see the exhibits for the first time, and to see the excitement I had as a child (and let’s face it, I was having a ball too. You can’t put a Marine Biologist in an aquarium and NOT have them giggle like a kid) definitely had tears streaming down my face.

Still for a 1-year-old we covered only about half of all the exhibits before fatigue started setting in, and then it was time for lunch anyway so we beat a hasty retreat.

Also I’ve been a member of the aquarium for several years now which gives me and an ample party free unlimited access, which is awesome, but what REALLY payed off was we got to side step the HUGE line of visitors who were standing outside in the 20 degree weather.

So what were the big hits of the Aquarium for little LaWeer’da? Well in short EVERYTHING! She was just OUT OF HER MIND the moment we stepped inside and was pointing and hollering with joy at all the magic she was seeing. Still if I had to guess what she got the biggest charge out of, it was the central reef tank just for sheer scale, but the wife declares it was….the penguins!

I don’t know if I could disagree with her. First up little LaWeer’da was constantly pointing at the birds and saying “Ducks!” (she knows best!), and second she REALLY wanted to dive in and swim with them…except that isn’t allowed…and she can’t swim.

It was an amazing day for her, and certainly for us!

This entry was posted in Biology, Family and Friends. Bookmark the permalink.

6 Responses to Busy Day for a Little Baby!