Images of the Antis: Limits to Rights

So this is a Meme we see all the time. The anti-rights cult cites the “Yelling Fire in a Crowded Movie Theater” exception to the 1st Amendment right to freedom of speech as somehow support that they can ban X Firearm or accessory, or limit the right to keep and/or bear arms. 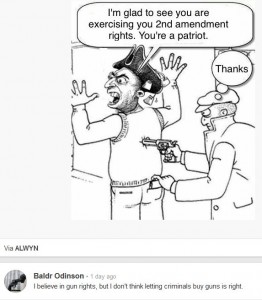 So we have a crazed looking gentleman in stereotypical Tea Party garb getting robbed by somebody out of 50s pulp novel or comic book garb.

The tea partier is praising the thug’s right to keep and bear arms! Jason below is “I believe in gun rights, but I don’t think letting criminals buy guns is a right”.

Well let’s go back to that “Yelling Fire in a Crowded Movie Theater” bit. First a bit of history, back in the days, movie film was made of Celluloid which was highly flammable. Given the high heat of the bulbs used to project the film, and the massive single-screen movie theaters were often packed with many people, this was a MAJOR fire hazard, and generally a dangerous place to be.

Now of course it is 100% legal, and generally a good idea to yell “Fire” if your movie house is catching fire, so it isn’t a ban on the word “Fire”, but to yell “Fire” in a location where fires are both very dangerous, and it is very crowded, but there IS NO FIRE, and you are aware of this, this has a very strong chance of causing physical harm and/or death to the patrons of the theater.

This is a crime. Same idea of the often cited “inciting a riot”, or the less deadly defamation laws. You can’t start telling people that neighbor you hate is a child molester, when he isn’t one, and there is no evidence to support that, because you will be doing serious harm to that person for nothing more than malicious reasons.

The operative words here are “Malice” and “Harm”. Outside of malice and causing physical harm to people the 1st Amendment is almost unlimited, and even some of the exceptions like vulgarity and pornography are on shaky and constantly shifting legal grounds.

Now onto the 2nd Amendment. Yes indeed, you have the right to keep and bear arms. That means to me that you can OWN whatever arms (be it guns, knives, pointed sticks, or clubs etc) you want, and carry them. What you DO not have a right to do is commit crimes with those arms. It is not legal to threaten somebody with a weapon. It is not legal to murder with a weapon. This robbery pictured is NOT protected by the 2nd Amendment.

To say otherwise is laughable, but say it they do!

Now last, let’s look at Jason and his little comment. First up he does NOT believe in gun rights. I don’t know who he’s fooling, he supports no guns for private ownership, nor does he support any use of said guns. As for the right of “Criminals to Buy Guns”, first up is leading in a disingenuous, as the Gun Control Act clearly defines what people can and cannot legally buy and own guns. I think he’s arguing for “universal background checks”, but again there is no evidence that criminals acquire guns through similar channels as legal gun owners. They don’t buy them at gun shows, they don’t buy them at gun shops, they don’t buy them through public ads. There are exceptions to this, but they are small. They acquire their guns through theft. They acquire them through friends and relatives who are aware that the person is a criminal. They acquire them through black market sales. All of these transfers are already illegal, and completely sidestep any means that would be enforceable through the various “Universal Background Check” laws proposed. Hell I live in a state where all gun sales are done through the state in one way or another, and yet still the criminals aren’t even slowed down by these laws.

Now we can debate if the GCA ’68 is legal. Does a free citizen have the right to keep and bear arms if they have been convicted in the past of certain crimes? I’m a bit more centrist on this, where I have a hard time arguing that convicts of VIOLENT felonies should be given arms….but at the same time I know that Johnny the Barroom Brawler, or Sally who did a nickle for manslaughter can own all sorts of deadly implements legally as free citizens. Certainly I see no reason why somebody who is a convicted felon, but has never laid a hand on another person is any more of a risk to shoot somebody than a person who has a perfectly clean background.

6 Responses to Images of the Antis: Limits to Rights