Jason Kilgore Doesn’t Get It

Russia hasn’t been behaving itself lately, what with annexing Crimea, building up troops on the eastern border with Ukraine, arming and aiding Ukrainian rebels, playing a role in the downing of Malaysian Flight M17, and, today, is even firing artillary into the Ukraine from inside the Russian border to help the rebellion. Putin is returning to the glory days of headlong Communist expansionism. As the most recent release of Time Magazine put it in their article “In Russia, Crime Without Punishment:”

… I feel that any thinking individual with a shred of love of democracy would approve of at least that much of a response. At this very moment, Russia is invading a sovereign, democratic nation in an act of unprovoked warfare. If we are lovers of democracy and patriotic to the needs of our country and our allies, wouldn’t it make sense to support the U.S. sanctions?

What are those sanctions from the U.S., exactly? From an article:

“The Obama administration last week announced a new round of sanctions against Russia that it says are intended to discourage Russia from continuing to support rebel groups in eastern Ukraine. Companies blacklisted by the U.S. include Russian banks, energy firms and eight weapons manufacturers — including Kalashnikov Concern, a maker of what is arguably the most popular weapon in the world, the AK-47.”

It makes sense, doesn’t it? If Russia wishes to act against our allies and our democratic ideals, we as a nation shouldn’t support Russia economically, and we should do what we can to stop them from arming rebels, including small arms like AK rifles.

Of course we can’t expect Jason to get the nuances of foreign policy. Indeed the Ukraine is our ally by the simple binary definition of the term, but so is Russia, as well as a bunch of other backwards and horrible states. I must quote this article first before moving on:

OK so his creepy cult-attire is because he’s in favor of peace. Well we’re allies with Russia, does that mean we should declare war on them? Does economic sanctions mean we are no longer at peace with Russia?

So what does the supposedly “patriotic” gun crowd do — the same men who quote (selected) portions of the Constitution and (selectively) pore over the history of the Revolution and Founding Fathers? They whole-heartedly support sanctions against Russia and Russian gun companies, right? Right???

Their love of guns supersedes any actual patriotic feelings. Take, for instance, when the inventor of the AK-47, Mikhail Kalashnikov, died. Kalashnikov confessed that he felt “spiritual pain” for having invented the AK-47 — the gun that has killed untold millions of people, including Americans in every war and conflict we have fought since Korea, and ushered in with a rain of bullets every Communist, jihadist, and anti-American insurgency since. The AK-47 symbolizes everything that is the antithesis of American democracy. Did the pro-gun crowd cheer that this villain had died? No, they mourned instead.

Got that? Owning an AK is not UNPATRIOTIC! I’m not a fan of the AK-pattern. They’re fine guns, just not the gun for me. I do prefer American-Made guns for my personal needs, and for non-political reasons I really dig on MASSACHUSETTS guns made by Kahr and Smith and Wesson. I also love my Ruger LCR, but I also really like the FAL and the SCAR rifles made in Belgium (tho most FALs are made in other places, including Illinois), still I’m a collector of Soviet and Warsaw Pact guns. I have a deep hatred of the evils on Communism/Socialism, and the irony that the arms used to uphold these evil regimes have been sold off to capitalist nations for profit does not escape me.

Kinky Friedman was once asked why he smoked Cuban cigars despite the embargo on the communist nation. He responded:

[I] Don’t see it as supporting their economy, but as burning their crops.

Very tongue-in-cheek, but really there is something about a communist nation like Cuba or China being major capitalist superpowers while they force their citizens to live under the boot of communism.

He also uses this image: 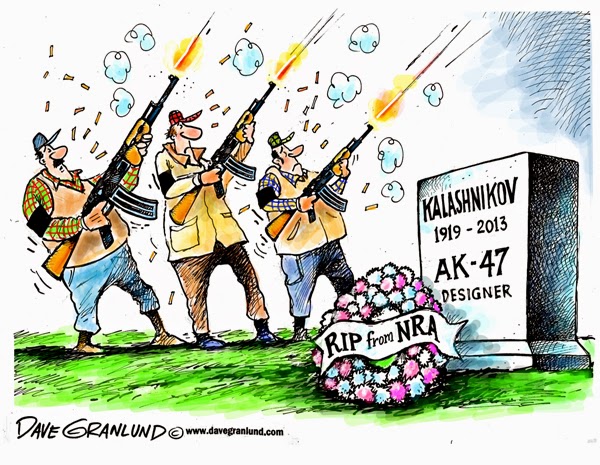 Now first I must comment on the bizarre fact that all men are dressed like they’re going out duck hunting, and the fact that the AKs are all of different sizes likely due to artist laziness/ignorance.

Still as much of an evil Commie Mikhail Kalashnikov was, he was a brilliant weapons designer, and I think that does somewhat eclipse his other flaws. So yeah, I was too saddened to hear he had passed. What’s the big deal?

This, despite the fact that it isn’t uncommon for the AK-47 and other AK variants to be used in crimes here in America. At the Kid Shootings blog, for instance, you can find 15 examples where an AK-47 was used in a crime involving children, including their deaths, and those are by no means inclusive.

“isn’t uncommon”? What about the fact that rifles of ANY TYPE are a minority of murders? Hell even the references from his own blog don’t account for many killings, and a few were people using OTHER weapons, but had an AK back at home.

So, flash forward to today. Despite the sanctions levied against Russia for their warlike and anti-democratic behavior, and despite the wicked history of the AK-47 on the battlefield as well as American streets, the gun is now selling out on American gun store shelves. And it’s not just AK-47s, but other Russian guns as well.

This isn’t going against the executive order, it’s buying guns already in the country! Jason of course doubles down:

And there you have it. It’s not about having a gun for home defense, and it’s not about hunting (assault rifles are a poor choice for either home defense or hunting, compared to other options). It’s about panic-buying an item that the gub’ment has told them not to buy. It’s the result of a deeply anti-authoritarian view, fostered in large part by the perpetuation of the false refrain that the government is going to take away everyone’s guns. And it’s about the very-male fascination by low-brows of making things go “boom” for “fun.” You’ve got to have the highest-quality gun for that, right?

Yeah, so-called “Assault weapons” are HORRIBLE for hunting. Yeah pull the other one. We certainly should take firearms advice from somebody who knows NOTHING about them, including misusing the term “Assault Rifle” for guns that are simply rifles.

Yeah, and AKs are fun, what’s wrong with that? Jason enjoys playing with swords for fun, even better the swords he prefers are Chinese designs. So can we say Mr. Peaceful is in favor of that horrible hole of oppression?

Of course not! It closes on hilarity:

Patriotism goes out the window when you have a need to fuel a gun fetish for “fun.” Panic buying doesn’t bring in new gun owners, generally, but merely appeals to those who are already amassing arsenals of these deadly weapons. These aren’t the run-of-the-mill gun owners who have one or two guns for home defense or hunting. These are the extremist, insurrectionist types, and we should all be fearful. Remember, too, that modern guns are made with high enough quality that they will likely outlive those who buy them. Where, then, will they wind up?

Mikhail Kalashnikov said on his deathbed, “My spiritual pain is unbearable” because of the gun he invented to “protect the Motherland.” I wonder if any of the gun nuts who are buying up Mikhail’s weapons will one day feel the same guilt for bringing such dangerous weapons into their homes and for betraying the needs of our country, just so they can feel part of some anti-government “fun” trend?

Yep, legal people following US laws are “insurrectionists”, and we should be hanging onto the words of an anti-American Communist for our patriotic barometer.

Thinking isn’t one of his strong points….

13 Responses to Jason Kilgore Doesn’t Get It