So let’s Talk about my new Ruger LCR Revolvers: 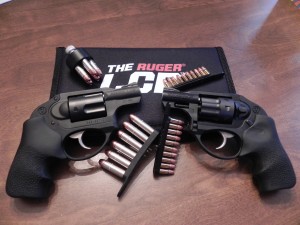 So I just bought this pair on Thursday, and shot them both today. So you don’t hold your breath, I’m VERY impressed and pleased with these guns. Money well spent, and I’ll right off recommend them to EVERYBODY. Also while I’ll be reviewing the .22LR and .357 Magnum offering, you can read a great review on the .38 Special +P offering here (Jay actually un-boxed that gun at my gun club, so I also got to shoot this gun a bunch) and Jeff Quinn has a great review for the .22 Magnum 6-shooter here.

So let’s start with the .22 LR gun. That’s the one on the Right in the above photo. So I’ll be leaving the technical specs to Ruger this gun tips the scale at just under 15oz unloaded. That’s plenty light for walking around. The frame window is a pretty substantial block of aluminum, the fire control group and grip frame is polymer, and the cylinder is a block of heavily machined stainless steel. The wheel has 8 charge holes which helps it keep up with semi-autos of a similar size, and also amuses me, because I love revolvers that don’t hold 6 rounds.

The gun has Hogue tamer grips which, frankly are entirely unnecessary for this gun, the recoil quite unsubstantial, which makes this gun ideal as a plinker, trainer, or a gun for those who are VERY recoil adverse. The trigger is a thing of legend for the LCR, and Ruger heavily markets the “Friction Reducing Cam” in the trigger. The trigger doesn’t feel like anything unique, it just feels like any quality double-action revolver…but it feels like those guns after the trigger has been pulled 10,000 times and well broken in. I’ll be interested to see how this trigger wears with use. Like most Double-Action revolver triggers its long, and smooth with a crisp break, and then the trigger will reset after full return. The LCR revolver all have concealed hammers so they are Double-Action-Only.

I was shooting my standard Federal Bulk Pack .22, and some Remington Thunderbolt lead ammo the shop had, and I had 100% reliability. I will note that the LCR .22 does not mash the rims of the ammo like my S&W 617 does, some of the strikes are actually quite faint, but maybe that’s overkill as every round went “boom”.

The sights are standard snub-nose fare. There is a serrated front ramp, and a grove cut into the top strap to make a rear sight block. These sights work surprisingly well, and the accuracy felt very good for the gun. I can’t give specific numbers as with any new gun I’m getting a feel for the grips so my consistency of a shooter is bad until I’ve had the gun for a while. I will say I’ll be looking for some bright-colored nail polish to apply to the ramp for some contrast as I’m not a fan of black-on-black sight pictures when shooting at black targets.

Also you can see in the photo I picked up some Tuff Quick Strips for my S&W 617 (given that both hold 10 rounds of .22), and I gave these strips their maiden voyage on the LCR 22. Now first I’ll say that I have used Biachi Speed Strips (also Pictured above) for my .38 and .357 Revolvers for years, and I love them. I find speed loaders to be a bit faster and easier to deploy, but a LOT more difficult to carry.

These Tuff Quick Strips are of comparable quality to the Bianchi offerings, only Tuff makes them in damn near every configuration, from long strips with many shots for your 8 and 10 shot revolvers, and some strips I really think they developed on a dare.

I was told by a fellow blogger that the .22 offering didn’t work. I haven’t tried it on my 617, but on the LCR I found I could easily load the chambers 3 at a time. Because .22 LR doesn’t have the rim thickness and support of revolver rounds the rounds do move inside the strip a bit more than the centerfire offerings, still the strips work well, and I am VERY excited to have them for the blog shoot for fast and clean reloads on the open firing line. I hate digging loose rounds out of my pockets to reload guns, and I prefer to have magazines, speed loaders, or speed stips.

Ok now onto the gun I was really excited about, the LCR .357. And by “Excited” I mean in that mixture of wonder, joy, and raw fear you get when you cross into a first.

Now I’m no stranger to .357 Airweights, as I shoot Jay’s every chance I get.

You can see me in the background with a handful of shells awaiting my turn, but look at poor Zeek! That gun is BASHING his hand. Really, Jay’s S&W360PD does feel a bit like you’re getting hit in the hand with a hammer. If you REALLY put a firm grip on the gun the pain is bearable, but you REALLY don’t want to send more than 15 full-house rounds down range in that gun. I’ve done it on a few occasions, and regret it in the morning.

But the Ruger LCR is NOT a S&W Airweight. What will it feel like? How will the grips handle the recoil?

After I warmed up with the positively mild LCR .22, I put a few .38 Special loads into the gun. Now I have and still carry a S&W 642, and the gun isn’t much fun to shoot. It isn’t painful, but it is not comfortable.

.38s in the LCR .357 still isn’t what I’d call enjoyable. Certainly not like the .22 LCR handles, or my Kahr PM45. It still bucks and twists in your hand…but not unpleasantly. It shoots like the large crop of subcompact 9mm pistols that are on the market now. Certainly you could shoot for a better part of the day using target .38 Loads without fatigue.

But let’s get to what we’ve all been waiting for, the .357 Magnum load. First up I was slinging my personal handloads which are 10 grains of Blue dot powder put behind a 158 Grain plated Barry’s Bullet. Never Chrono’d this load, but from a full-size gun it should be pushing about 1400 FPS. Its hardly something that would impress Elmer Keith, but hardly a creampuff load.

Now this gun weighs 17 Ounces (heavier than the other LCR guns because the frame window is stainless steel, and the cylinder is fluted in a more traditional sense, which frankly makes it look better than any of the other Polymer revolvers), so this is still not something for inexperienced shooter….but you will NOT look like Zeek after shooting this gun. The Hogue Tamer grips keep the gun from biting into your palm, and it makes this gun a LOT easier to shoot. I’m also not sure how much the polymer frame flexes, but I know that polymer framed pistols always seem to kick less in my hands than metal guns of similar weights. Still the recoil is not as legendary as Jay’s 360PD. This is NOT a “Snubbie From Hell”.

Still this reduced recoil sensation does NOT come for free. The flex in the Hogue grips allows the gun to rock in your hands more, meaning that it feels like it takes a little longer for the gun to come back on target. We’re talking fractions of seconds, but noticeable. Also while the webbing of my hand didn’t feel beat up, my trigger finger was getting slapped by the trigger as the gun rolled back.

Again, like the .22, every round fired, and extraction was easy. The trigger and sights were identical on these guns. When I picked up the gun from the shop the cylinder latch was a bit rough, but it seems like this is loosening up. The .22 Latch is smooth and easy.

I feel perfectly comfortable carrying this .357, and I would carry it with .357 Magnum JHP ammo without hesitation.

On a neat note, this is the fired cartridge that came with the gun: 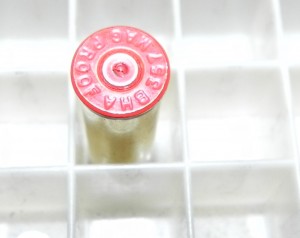 Does anybody know about these Proof loads? When I saw this the other night, I was impressed that somebody’s job was to fire overpressure proof loads out of crazy light revolvers. Still I’m not sure if they use a gun vice, or just hand-shoot the gun. Still I was thinking about reloading the round in the box because I’m not sentimental, but I won’t be re-filling this case.

Also as a S&W J-Frame owner, I have speed loaders and holsters for them. I haven’t tried any of the odd leather holsters I’ve never used, but the pocket holsters, the Remora IWB, and my wife’s Galco IWB all fit this gun. The J-Frame speed loaders also work for this gun.

So all-in-all I’m VERY Impressed with these guns. Further I’m a HUGE S&W Fan, and overall prefer S&W revolvers, and I consider the S&W J-Frame to be one of best carry guns on the planet. I now think the Ruger LCR has surpassed the J-Frame. And given how inexpensive these guns are, that’s even more amazing!

**UPDATE** Its the next morning and my right hand is 100% Functional! So yeah it wasn’t just the excitement of taking TWO new guns to the range. These grips really soak up the recoil!