Images of the Antis: Criminal Records

This one is too ironic not to touch! 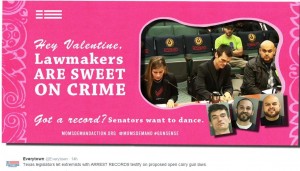 So here’s the associated article the antis are pushing.

So a bunch of the Open Carry Texas people have been arrested or been convicted on sundry minor crimes in their past. Go ahead read it and see what you think. Many of the convictions are for misdemeanors that don’t disqualify them from gun ownership (or open carry of long guns) or from getting permits in other states. Again an example of how Texas isn’t as pro gun ans many think.

Still the irony is this is coming from Michael Bloomberg’s shell groups. Hey Bloomy, I get you’re trying to do an ad hominem attack against open carry by noting that some activists have been arrested (but not convicted) or convicted of chicken thevery and spitting on the sidewalk.

How many of your little anti-gun coalition are sitting in a Gray-Bar Hotel? Doesn’t look like Dave Hardy has been keeping up on that site, as I don’t see mention of lovely people like Ray Nagin.

Bloomberg is the proverbial man in a glass house throwing rocks!