Images of the Antis: Training

Odd that this image has the Everytown logo on it, but no text linking it to Bloomberg. It’s a legit image from the group, I wonder if ANY AstroTurf associated with Bloomberg has become poison so they have eliminated all but the minimalist logo. 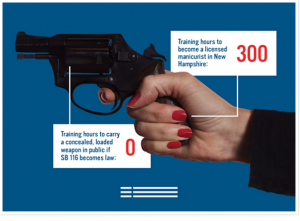 Now here’s a fundamental difference between Statists and those who are liberty oriented.

The Anti-Freedom drones say “Look! It takes 300 hours of training to become a licensed manicurist in New Hampshire, but there is no training requirement to carry a handgun!” (Note they say to carry a “Concealed” handgun, but New Hampshire is an open carry state, with no permit requirement for open carry, and no training to get a permit for concealed carry, which is $10 for residents) While when I look at this image I go “What do they need to train Manicurists for 300 hours for?” My wife rarely paints her nails, and when she does she often does it at a spa with friends as a social thing. My Mother frequently has colored nails and does it herself. Heck THIS gorgeous job was done by my Sister-in-law while I was reading a James Bond novel.

OK I got thinking, when I walk by the local nail spa I see all the staff with masks working on nails, so there must be some safety concern that every salon wears similar masks (tho it can’t be for chemical vapors, as they’re always particulate masks), also my favorite gun shop was burned down several years ago. The neighboring shop was a nail salon and some of the chemicals caught fire severely damaging several shops on the strip.

So their might be some safety concerns handling all the solvents and lacquers et al in the large quantities being a public business, rather than a household that only keeps enough supplies for one or two people. Of course since they’re using sharp objects around people, hygiene and liability probably have some bearing.

Still even being cynical and overbearing I don’t see what couldn’t be done in a 90 min DVD and maybe a 5 page multiple choice exam not amounts to 2 months of 40 hour training weeks!

So while their side cites disparate training numbers, I question why training is needed at all.

And that’s not getting into the REAL stupidity of it. Note how I said above that New Hampshire is an Open carry state with no permits required, and there was no training for a concealed carry permit? Yeah that’s just TODAY’S laws, note the citation of SB 116. I had to look it up, but it’s New Hampshire’s current permitless carry law!

So this whole thing is opposition to proposed permitless carry law???? Seriously Bloomberg, I’m amazed New Hampshire hasn’t passed this laws AGES ago.
A) New Hampshire borders Vermont which has NEVER had laws concerning the carrying of firearms. B) New Hampshire’s permit process is on the “Why Bother” levels. All that is done is you fill out a ONE page application, pay $10, and they run a NICS check on you and you get a piece of paper with the Chief’s signature on it. It’s not even LAMINATED, and it doesn’t even have your picture on it! Seriously, why bother! C). No permits are required for open carry, so already NOTHING is required to carry a loaded gun in public, the only legality is the METHOD of carry. and D) Several other states have gone to a similar system of carry with NO ill effects.

Another example of antis going crazy over the idea of a reasonable law being passed.

5 Responses to Images of the Antis: Training