Images of the Antis: WTF???

So often for this segment I’ll just link to a hosted image, but this one I needed to do a full screen cap: 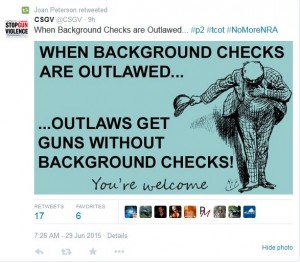 Maybe you would believe me, but that CSGV would put up this image, and Joan Peterson would retweet it.

Hell even a hard-liner like me simply wants to get rid of the Brady Background Check system because it’s essentially worthless, but even then I’d be getting rid of the MANDATORY background system. If you wanted to PAY for a background check…for any reason, you could.

Just so obtuse! Seriously the anti-gun camp is being run by lunatics!

3 Responses to Images of the Antis: WTF???