Images of the Antis: PLCAA

haven’t done one of these in a while: 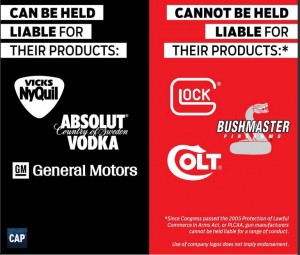 Let’s just apply a little logic to the hand-wringing buffoons. So we have Glock, Bushmaster, and Colt in the naughty-list, but we know that applies to ALL gun makers, because that’s what the Protection of Lawful Commerce in Arms Act protects.

So on the “Liable” side we have Nyquill, Absolut, and General Motors. So the Patent Medicine (maybe the pharma industry in general), The Auto Industry, and alcohol.

Let’s just start with booze because, well I’m enjoying a cocktail right now, and the deaths associated with my love of cocktails is WAYYYY higher than my love of fine firearms!

I don’t know any victims of gun violence, but I know a few people who have committed suicide, and yeah, most of them used a gun. Still if you have firearms you live a long healthy life, or you don’t, there are no adverse effects to gun ownership….meanwhile I know people who have drank themselves to death, but I also know people who likely have health issues from years of abusing alcohol….even my excessive gun collection hasn’t done that!!

And do we see lawsuits when somebody dies of organ failure from heavy alcohol abuse? When an alcoholic gets fired from their job for drunkenness? When some high school seniors die in a fiery wreck after getting loaded? NO! Nope, you accept the abuse of the abuser, and you sue the drunk that caused you damages. The person that brewed or fermented the beverages that abused is irrelevant.

Hey, what about the NyQuil? Well turns out that’s a heavily abused over-the-counter drug! Due parents sue Vics when their kids get all fucked up on DXM? Nope, they deal with the problem behavior of the child.

On a wider scale, I can’t turn on the radio without hearing about the Opioid abuse problem in this country. Do people sue the pharma companies for making Oxicodone, Vicodin, Morphine, and Codine? Of course not, again, action is taken against the PERSON abusing, not the people making the substance abused.

We talked about drunk driving….again, no suing of the auto makers.

Hell from Center from American Progress’ own literature:

The law includes some narrow exceptions for permissible civil lawsuits against gun
manufacturers and dealers, including for knowingly transferring a gun to a person with
the knowledge that they intended to use it in a crime of violence; violating state or federal laws governing the conduct of the gun industry; negligent entrustment; breach of a
contract; or limited cases involving harm to individuals caused by design defects.

So, you know, the EXACT same grounds we can sue those companies. If Absolut made a batch of vodka that was 40% Methanol rather than ethanol, they’d be sued out of existence, but a college student asphyxiating on their own vomit after funneling a bottle of said vodka, no lawsuit….

A car with faulty airbags that cause injury or death can be sued….but a teen texting while driving slamming into a rock wall? NO LAWSUIT!!!

We’ve seen tons of lawsuits about bad drugs, but when good drugs are used wrong? You guessed it! NO LAWSUIT!!!

Before the PLCAA there were lots of bullshit lawsuits against gun makers who did nothing wrong….the courts saw that too, but it didn’t change that lawyers and court fees needed to be paid. The antis were going to rinse and repeat until the company can’t keep up with the bills.

Cue the PLCAA to stop the abuse, but honesty has never been a strong suit of the anti-gunners!

3 Responses to Images of the Antis: PLCAA