I Thought I Threw This Away

I’ve talked about it a bit over the years,   but one of my goals in my high school senior yearbook was to “Sell more books than Stephen King”. While it was totally my goal to become a Marine Biologist, and after graduation I attended the same school Stephen King did, and studied in the same library where he wrote The Gunslinger. But Unlike King who studied English, I was studying Biology and Marine Sciences.

I knew I could get steady work doing research, and could always write in my free time.

But honestly I had already given up, I was going to write when I felt like it, but my hopes had already been dashed at someday making a living cranking out books, and living a life of Luxury like Stephen King at al.

See either Christmas of 1995 or my Birthday the week after I got a book from my parents. Forget the actual title but it was a book on how to get your writings published. It had useful tips on writing and editing, it had information on how to find and hire and editor, it had addresses to publication houses, and it had lists of magazines that published various short stories, often with only copies of the magazine in lieu of any payment.

Well that was exciting, I was going to start small and work my way up the ladder. I picked a short story I’d written, don’t even remember the word count, but it was maybe 5 pages printed out, and it was a ghost story set in a fantasy setting where a young boy encountered a ghost in the woods while exploring, and ended up bringing peace to the tormented soul.

Now before you go thinking this is a deeply tragic story, I doubt I’d have ever made it as a writer, I wasn’t a terribly well-read teen, and honestly I’ve never been able to come up with a story that isn’t just a simple short-story with a linear plot. And this story “Eyes of the Shadow” was not great. I don’t even know if I have a copy of it anywhere, but I know I have a hard copy of a story I wrote in college, and I re-read it one night and was HORRIBLY embarrassed that I thought it was anything approaching good.

Either way, I wasn’t asking for money, I just wanted to see my story in print with a circulation more than just the few serials I wrote for my school newspaper, that not even many of the student body of my relatively small school read.

I got myself a collection of manila envelopes, picked out half-a-dozen magazines I thought my story would fit in, wrote cover letters, and printed out hard copies of my story (this was pre-email, kids, ask your folks!) and mailed them out.

In the following weeks I got several very simple rejection letters. Essentially “Thanks for your submission, but we can’t use it at the time”…..then I heard back from one of the only magazines I remembered the name of, Marion Zimmer Bradley’s Fantasy Magazine.

All I remember of the letter was how crushing it was, and my final submission to magazines. The Juice just wasn’t worth the Squeeze.

When I met Larry Correia one thing I wanted to tell him was how Marion Zimmer Bradly’s rejection letter really took the fire out of my belly for being a writer, and I told him I wish I had saved that letter, but I assumed I had trashed it.

I think you know where this is going. My wife has been in a big cleaning kick this week while she’s home on holiday break, and she’s found cashes of old stuff I’ve carted around for decades, and wanted me to sort them. I threw away binders of my crappy art, and some hard copies of old stories I’m happy to never read again or share.

But there is one thing I found that I’m keeping….and now sharing with all of you! 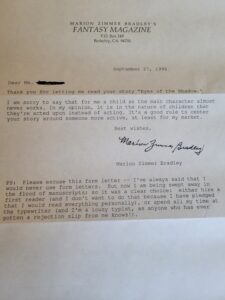 There it is! And WOW! I wrote this story as a teenager, and the main character was a pre-teen who lived in a world where his parents frequently were away from the home. Honestly much like my own latch-key youth, and my parents land abuts undeveloped forest. Also I imagined a young kid would be more scared of a ghost than and adult, especially his parent who I hinted at being adventurers. This also made the simple acts of bravery he performed to be more impressive, and I hoped more relatable.

So not only had I been rejected, but rejected by a famous author who totally missed the whole fucking point of my story.

And honestly I don’t even know if I registered that she addressed it to “Ms.

Oh but the plot doesn’t end there….see I mentioned talking about this to Larry Correia, because he was the person I first heard about the Sexual Molestation accusations against the Late Ms. Zimmer Bradly.

Moira Greyland, Bradley’s daughter, went public with her accusation on the blog of the author Deirdre Saoirse Moen earlier this month, giving Moen permission to quote from an email in which she wrote: “The first time she molested me, I was three. The last time, I was 12, and able to walk away … She was cruel and violent, as well as completely out of her mind sexually. I am not her only victim, nor were her only victims girls.”

Greyland is the daughter of Bradley and Walter Breen, who was jailed for child molestation and died in prison. Greyland wrote in her email to Moen: “I put Walter in jail for molesting one boy … Walter was a serial rapist with many, many, many victims (I named 22 to the cops) but Marion was far, far worse.”

I actually can’t find the original post where Greyland went into more detail about the abuse done by her Mother and Father to young children, but honestly I don’t think I’d do more than just link it, rather that quote some of the horrible shit here.

When I first heard about her abuse it made me think back about her issue with a child being the protagonist of my story. Puts a different spin on “I am sorry to say that for me a child as the main character almost never works. In my opinion, it is the nature of Children that they’re acted upon, instead of acting….” Given what she was doing to children….

Well if there is a Hell, we can all know that Ms. Zimmer Bradley is there.

This entry was posted in Family and Friends. Bookmark the permalink.

2 Responses to I Thought I Threw This Away