Tam has a great post up about this picture: 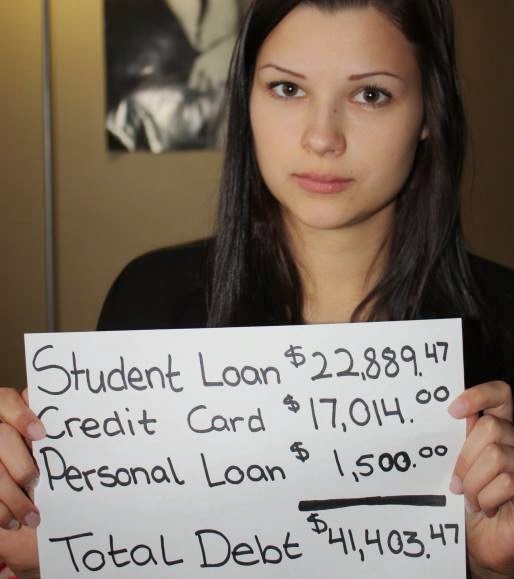 Robb also is talking about it:

If either of my daughters takes a picture like the one posted at Tam’s, I’ve failed as a father, unless the dollar amounts were $0.

We’re teaching both of the girls that debt is not something to take on lightly. I’m not 100% against debt no matter how ‘Dave Ramsey’ I get from time to time. The problem is we go in debt for stupid shit like a new TV, a fancier cellphone, clothes, etc.

I have a mortgage, and a car payment (ok not really on that one, its 0% interest, and we have the money that pays the monthly dues, I’ll earn interest while this car depreciates! Its the last return I’ll ever see from it!) but overall I, and my wife have lead a very anti-debt life.

I got my first credit card when I was 17, and was instructed by my father to NEVER charge for anything my bank account couldn’t back up. For all my Dad’s “Progressive” leanings he’s VERY fiscally conservative with HIS money. Before he went in for Knee replacement surgery, his fellow teachers gave him a gift of a picture of him holding fistful of dollar bills from a school dance with the caption “How much for a Knee?” and his perennial quote that I guess the teachers heard as much as I did growing up “If you can’t buy it with cash, you can’t afford it!”

Back when Deval Patrick got elected governor there was a lot of talk of gun bans, so I made a few panic buys of some guns that were on my wish-list and their future purchase was dubious. I ended up letting one of the guns I bought ride on my credit card for a single month. ONE MONTH, and I was mortified that I had to do that. I couldn’t buy that with cash, so I really couldn’t afford it. Of course I paid it off with the interest of IIRC $17, but that’s not how I like to roll.

I don’t remember what that gun was, I think it was whatever I bought after I got my SKS, which I payed for with a stack of $20s. I do know I had just spent my fun-money when I saw my Beretta 21A at the gun shop. I actually walked out of the shop, knowing that this is not an “approved” pistol, so its not like I can just ORDER one from the factory, or that you see them very often in the rack. I didn’t have the cash to buy it, so I couldn’t afford it. I ended up calling the shop the next morning as soon as they opened (I actually called twice since the first time nobody was there to answer the phone) and had them hold it for me. I paid off most of it that month and the rest the following.

The fact that this little snowflake has $17,000 in credit card dept, likely all frivolous crap she didn’t need, obviously didn’t have the cash for. Hey but MAGIC MONEY! I mean you swipe the card and they give you shit! Its YOURS right?

Hell I even gulp when I say that I own my house. Technically I own it, I pay taxes on the damn thing, and I LIVE here, and we’re easily making the monthly payments, but still the bank has the title.

My wife got buried with some credit card debt in her first year of college. Her Mom bailed her out with the stern statement that it would be the very LAST time she did such a thing. My wife, unlike me, has NEVER carried a balance since.

Like Robb, if my daughter EVER posts a picture like this, or a lament about being buried in BS debt I will have failed as a father!