NRA Show Must Have

There are two guns that I saw at the NRA Convention that made me FLIP, one was the FNH SCAR-17 that I talked about on Vicious Circle #50 and I’ll probably be doing a brief review of later. The other was the Chiappa Rhino

There is their 5″ model. Now I’m totally digging when people play with how the revolver works. Seems that overall ever since S&W invented the hand-ejector, overall the design of the revolver essentially stalled, meanwhile there are a ton of different pistol actions, and materials. That Has Changed Recently.

I have handled both of the above guns, and I like the feel of the Ruger LCR, and I’d REALLY like to get my hands on their new .357 Magnum version. I also handled the S&W Bodyguard and I found the cylinder latch to be a prime example of fixing something that isn’t broken. I’ll stick with my S&W642, thanks Guys!

Well the Rhino is another radical departure from the conventional revolver. The big change is of course the barrel position. This is a 6-shot .357 Magnum and the barrel is aligned with the lowest position in the cylinder. This coupled with the grip shape the webbing of your hand will be DIRECTLY in line with the bore axis. This should eliminate a LOT of muzzle flip as well as felt recoil.

Another HUGE change is the cylinder is Hexagonal in shape and unfluted. This means the profile of the gun is very flat. The frame is also made of an aluminum alloy, meaning this 5″ model weighs 31 oz. as you can see in the web page above they have a 2″ snubbie that tips the scales at 24oz. These guns are made for carry, not for target shooting, like the Mateba which was designed by the same man IIRC.

Another weird thing is the “Hammer” which is actually a “Cocking Actuator”. You pull it back and it cocks the gun’s internal hammer, but then it returns to rest, so visually you can only tell the position of the internal hammer by seeing the trigger position. To decock the gun you pull the actuator back, pull the trigger, and lower the hammer. Some have seen this as a safety issue, but overall I don’t see it as any more dangerous than manipulating the hammer on a conventional revolver (DA or SA). I will say that they do at least have a 2″ snubbie without the “hammer” in essentially a “Centennial” configuration. This is the winning configuration for any carry or defensive gun, if you ask me, as it simplifies the gun, and closes up the action from getting dirt in it. That being said, if you ignore this “Hammer” it won’t cause you any issue.
Let’s look at the guts! 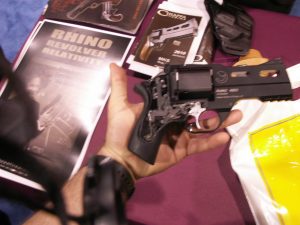 Not a great picture, but a better one can be viewed here
Really takes that “I like revolvers because they’re simple” down a few pegs, doesn’t it?

Also the cylinder release is a simple lever that is easy to manipulate and I see it as no different than the sundry differences between the latches of a S&W vs. Ruger Vs. Colt. The guns I held very much felt like prototypes, not early production models, they were tight and rough. Took a bit of work to get the cylinder open, and work to get it closed, and the trigger felt “unfinished” but honestly it was a good weight, and didn’t stack. IMHO the grit would likely vanish with some dry firing and range use, but if the folks at Chiappa manage to clean that up a bit, more the better. Another nice feature is the 4″ and up all have rails for scopes and lights and such milled into the barrel shroud and sight rib.

I certainly am looking forward to getting the 2″ Snub (Specifically the one without the “Hammer” and with the rubber rather than wooden grips, as I prefer those) I see it as a very interesting carry option, and I think the ergonomics will do a LOT for taming recoil of heavy .357 Magnum loads, and it looks like a nice way to conceal 6 shots in a small package.

MSRP is listed for the snub at $795, which I hope will translate to $600 retail, which seems VERY reasonable to me.

Seriously, I’ve been dreaming about this gun!

0 Responses to NRA Show Must Have