Now look, there’s talk of renewing the “Assault Weapons Ban”, but let’s face it, gun shops can’t keep black rifles in stock, and the majority of hand guns crossing the counter accept magazines that hold more than 10 rounds. There is a massive army of people who will NOT stand for their rights and their property being vilified.

Still Miguel and Thirdpower are starting a little Meme. 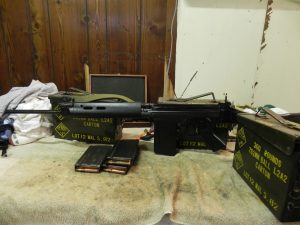 That’s my FAL, a few of my 20 round Israeli surplus magazines, and 900 rounds of Malaysian military ball ammo (which will defeat type IIIA or lighter ballistic vests…its not MADE to penetrate armor, that’s just the physics behind it) that I happened to have bought online.

No murder, no assault, no threats, not even ill temper. Hell even if somebody said “Hey I work for the CIA and if you want, I’ll let you murder anybody you want, so long as they’re not a diplomat or a VIP, and we can totally cover it up and you’ll never be traced to it!” I doubt I’d be very interested. Sure I could justify putting a bullet in the brain of Mahmoud Ahmadinejad, but that’s because I consider him a Hiter or a Pol Pot of our times, and killing him has the potential of saving thousands of lives. But there isn’t a person on the planet who I’d harm for selfish reasons, the people I don’t like I just don’t care about enough to want to burn any calories for their sake.

Maybe my rifle is defective?

Still I want to take another twist on this. Have a look at the three rifles in these posts. What’s the difference between them? Yeah Third and Miguel both have AK-pattern guns, and I have the (far superior) FAL pattern, but beside design and caliber? Well Miguel has a lot of black plastic on his gun, and his mags are 30-rounders while, Third is displaying that one fat drum, and my mags are 20 rounders.

DETAILS. All three guns are fixed-stock rifles. All have removable magazines, all have pistol grips, but Miguel’s is different, HIS has a bayonet lug.

Yep only Miguel’s is an “Assault Weapon” by the definition of the 1994 ban, which states that rifles must have at LEAST TWO selected features to be restricted. The pistol grip is one, but my barrel ends at a flat crown (so no flash suppressor, bayonet lug, or muzzle threads that are found on standard issue FALs), and Thirdpower’s rifle has had the bayonet lug ground off, and a nut welded to the muzzle threads.

And just to go further goofy, their guns are in 7.62×39….mine’s a .308 Winchester (which will eat 7.62×51 NATO). Mine’s a good bit more powerful than theirs, shooting a heavier bullet at a faster speed. But mine is also chambered in a very common hunting cartridge, and is VERY well suited for white-tailed deer so long as I use a 5 round mag to comply with sporting rules. Of course people often compare 7.62×39 with .30-30 Winchester, which is also a popular deer cartridge.

Oh and BTW this pink thing in Uncle’s hand, is both an “Assault Rifle”…but also a small girl’s .22 rifle. But a pistol grip, removable magazine, bayonet lug, muzzle threads, flash hider, and adjustable stock (which is a must for a child’s rifle as they grow quickly), makes it VERY solidly in the “Assault Weapon” camp.

Yeah, the .308 rifle (which BTW Miguel, Third, and My rifles are all built up from military surplus parts, and its likely that some part of all of our guns were in war zones fighting, meanwhile Uncle’s “Assault Rifle” was built just for the American sportsman and shooter) and one of the AK-47s aren’t assault rifles….but another nearly identical AK is an Assault rifle, as well as a kid’s .22.

Now this post has been rambling and covered a lot of ground and exposed a lot of stupidity, that was intentional.

Why is the definition of “Assault Weapons” so illogical and confusing? Simple because they were never after “Assault Rifles” in the first place. They’re after ALL GUNS, if they weren’t they could openly say what guns (and were talking make, model, caliber, and features, not just “We aren’t coming for your hunting rifle, or target gun!” as they are, because they’re after my hunting gun, and Uncle’s training rifle) are OK and what guns are bad, and WHY those guns are bad.

They are after your guns, if they weren’t why the confusion?