The Antis And Justifiable Homicide

This little quote has been making the rounds. Others’ comments can be found here, here, here, and here. and the quote: 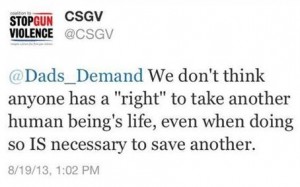 The others all have great points. The one I want to expand on is how RADICAL CSGV and their compatriots are. First up you’ll note this is NOT a gun statement. They make no reference the TOOL used to defend innocent life. Sure one can use a gun, as its a VERY good tool when it comes to enacting deadly force. That’s why cops carry guns even tho they have all sorts of other cool tools hanging off their belt.

Still the tool could be a knife, a club, a rock, a stick, or hands and feet. Think about that in the context of this statement.

CSGV is AGAINST JUSTIFIABLE HOMICIDE! Can you think of ANY nation, high income, low income, first world, third world, or any hemisphere that doesn’t have SOME SORT of law on their books that protects a killer who killed to protect their life, or the life of another innocent person? I sure can’t. I know that in the UK justifiable self defense is VERY difficult to defend, and anything but improvised weapons are deemed by the courts as some form of premeditation. Also they believe in matching the force of your attacker. But you can beat a mugger or a rapist to death with your fists, your feet, or a rock or stick if you’re so lucky and be deemed as justified in your actions by a court of law.

Essentially what I’m saying is that the idea of righteous violence, even deadly violence is an innately HUMAN trait.

This is my point, CSGV and the other anti-rights, anti-freedom cultists aren’t just against the rights of Americans, or Gun Owners, but the rights and nature of HUMANITY.

While the anti-social actions they take aren’t as severe as those who rape, or murder without remorse, their sentiment should be seen as just as alien to any healthy human no matter who you are, or what culture you call your own.

This is how radical they are, and how monstrous they are. Many have pointed out their designs might simply be from selfish self-preservation. Given the threats CSGV has leveled against innocent civilians, I can understand that sentiment. Be it calling for the murder of an innocent man or their thinly veiled threats against bloggers on twitter or even the floor of the US Senate, their actions can be extrapolated to a point where one might be justified in shooting these fanatics to defend innocent lives, and of course that would not be optimal for them.

Still I suspect they are indeed THAT mentally damaged that they can’t even relate to something that is a core pillar of humanity itself.

5 Responses to The Antis And Justifiable Homicide