Images of the Antis: Heros 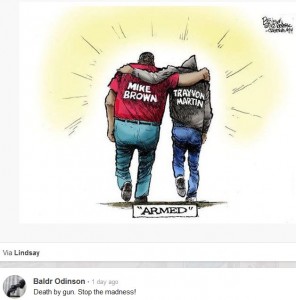 Now the facts on the Michael Brown shooting haven’t all come to light yet. In my humble opinion, like the Trayvon Martin shooting, there were no “Good Guys”, but when allegations of murder come up, you need to look at the facts, not the character of the participants.

That being said, Trayvon Martin, and Michael Brown were not good people. They were not admirable people. Both teens had a violent history. Both teens likely had ties to gangs and the illegal drug trade. Certainly with Martin, and likely with Brown, both were violently assaulting their killers before they were shot, and both men who pulled the trigger sustained serious injury. Trayvon Martin had been kicked out of school for violent behavior, drugs and theft, and his folks were so concerned about his future they shipped him 100 miles away (probably to take him away from the gangs he was so cozy with) in hopes to clean him up. It didn’t work.

Brown had just got done robbing a store by brute force alone, and alleged was trying to use that same deadly weapon against a police officer.

These are the heroes of the anti-gun world.

Last is the irony of Jason’s statement:

Death by gun. Stop the madness!

OHHH but most of them are shot by other young black men of questionable character. Sure by American racist standards, George Zimmerman could be considered “Black”, but he was first reported as “White”, and later as “White Hispanic”. Officer Wilson who killed Brown has by all accounts been labeled as “White”.

So to the anti-rights cult, not only do only “Gun Deaths” count, but white people shooting black people, no matter what the circumstances, count MORE!

Seems pretty racist to me. Oddly enough, most of these anti-rights cultists are in the same political party as the KKK. Go figure!

This entry was posted in Guns, Politics, Safety. Bookmark the permalink.

3 Responses to Images of the Antis: Heros