Images of the Antis: More of that Bogus “School Shooting” Map

I think I need to include Jason’s Comment on this one: 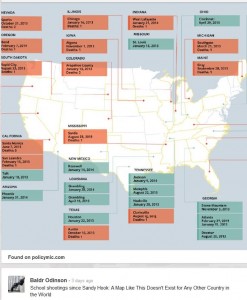 Now this image is pretty close to the one I posted here.

Still I like this image better than the Moms Demand Action because it gives more details.

And by details, most of the citations and blank, I wonder why that is. Further after blank ones the 2nd most plentiful shootings are single-victim. Now remember the article I cited? Yeah those single-victim shootings are mostly suicides that happen on or near school grounds, often not during regular school hours.

Now there are two double-victim shootings, one was the Colorado shooting that was stopped by a resource officer who never fired his gun. The mere SIGHT of a gun triggered the shooter to take a second victim, himself. Again, the officer didn’t fire, and didn’t even say much to him, the guy saw the gun and shot himself. You think he might have considered the school’s “gun free zone” policy before taking that shotgun to school? Do you think this shooting would have went down if the school was like the street just outside where any 21+ Faculty, employee, or visitor might be packing a gun?

And again, the 2nd victim was the suicide of the shooter.

There is one by-the-antis playbook actual mass-school-shooting on the map…in Santa Monica California! Also this wasn’t actually a “School Shooting” either, it was a rampage through the unarmed streets of Santa Monica, and the shooter took his last stand in a college library.

Really this paints quite the different picture than the antis try to weave. First up we know that school shootings aren’t but a drop in the bucket compared to the shootings that happen in our gang-infested cities. This YEAR of shootings adds up to MAYBE two bad weekends in Chicago, DC, LA, New Orleans, or New York. I’m not belittling this violence, tho I might be belittling the late-night suicides in parking lots and grounds that HAPPEN to be schools, one person killing themselves isn’t much of a public safety issue, what I am pointing out that is if we JUST had school shootings we’d be one of the safest nations in the world. Why focus on the small potatoes?

Simple, FEAR! You see the average anti-gun person doesn’t give a shit about gang violence, because they aren’t in gangs and don’t live in the inner cities. The people that live in the inner cities rarely vote, but when they do they pull the lever next to the “D” no matter what. No the people who live in the Lilly-white suburbs are the swing voters, and if you tell them we need “Universal Background checks” or “Bans on High Capacity magazines”, or “Assault Weapons Bans”, or their little snowflake is going to be gunned down by a crazed psycho with a Bushmaster AK-15 .50 cal Machine gun! Now you have their attention.

Attention is what they need. Just look at the involvement with anti-gun groups. Its pitifully small! Their conventions fill a small ball room, and their sponsored laws wither on the vine in all but the most fertile soil, and even then its not likely. So even if their 80 or 90% numbers were correct (I doubt they are) they can’t get anybody to actually STAND UP for them.

Yet these aren’t crazed gunmen shooting up schools filled with little kids and teens. These are mostly suicides, or inner city gang hits. The crazed spree shooters are an anomaly.

School shootings since Sandy Hook: A Map Like This Doesn’t Exist for Any Other Country in the World

Well they can’t because only this country has a map that includes all our 50 states. And of course if other countries simply made a map of suicides on school grounds, and weren’t concerned about the tool used, I suspect there would be several that would kick our asses, like Japan, and any nation that has a bulk of its land mass above the arctic circle.

This entry was posted in Guns, Politics, Safety. Bookmark the permalink.

1 Response to Images of the Antis: More of that Bogus “School Shooting” Map