One Last Bit on Mike “The Gun Guy” Weisser

So I thought I’d put a few final thoughts on Miek Weisser AKA “Mike the Gun Guy”.

First up, not long after the events detailed here, Mike Started manually deleting any comment by me on his blog. A little while later he figured out how to actually block my comments in the blog software.

A few other pro-gun commentators have stopped appearing too, and recently he’d taken to delete anti-gun comments that I can only assume are too moderate for him.

So the number of anti-gun blogs that allow for debate is again Zero. I’ll note that the Armed With Reason still has an open comments section….but the blog is abandoned. **UPDATE** They appear to have re-launched their site with new content….It appears I’m one of the first to notice, as there are no new comments up. We’ll have to see if they haven’t changed things.

Before that Mike left me interesting emails like this:

And you’re still chicken-shit I notice. Funny, you took the trouble to find out where my shop is located as well as to get the mail address of my ‘political action’ group (which is nothing of the sort, by the way.) But of course you hide behind a phony name. You guys are all alike. Big and tough with your guns. Basically cowards.

Essentially he started goading me to give him my real name…which of course is out there. All the information I know about him is on his blog, or you can quickly find by Googling “Mike Weisser”.

When I asked him how I benefited in our discussion over gun laws by knowing his name and address of his gun shop, and what he might benefit from knowing my name and address, he essentially didn’t answer.

I of course construed this as a mild and vague threat. He didn’t want to talk to me, but he wants to know where I, and my family live? 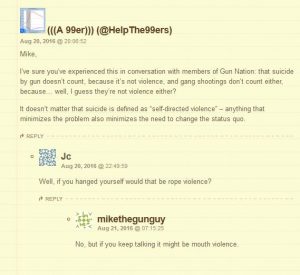 He’s mostly harmless, still when his go-to greeting is “Go Fuck Yourself”, he doesn’t strike me as a very stable guy.

Another interesting thing of note is that he’s Mike “The Gun Guy”, and he describes himself as a “Gun Nut”, yet he writes about anti-gun rallies, he writes about donating to Michael Bloomberg, and he write about how dumb Trump is, and how ABSOLUTELY Amazing Hillary Clinton is.

You know what he doesn’t write about? Guns.

Also his actual knowledge of guns is surprisingly bad. Like seriously, This guy ACTUALLY owns a gun shop, and ACTUALLY teaches gun safety classes, yet he made THIS image and has used it multiple times: 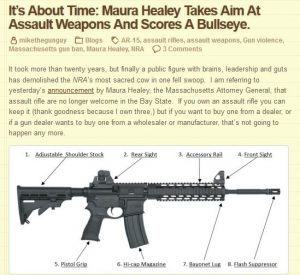 I mean he isn’t saying “30 Magazine Clips” or “Ghost Guns” or stuff like that, but it’s the little stupid mistakes that just makes me wonder, is he amazingly stupid, or amazingly lazy.

In the end Mike is really a medium size fish in a very small pond…he’s trying to make himself seem bigger than he is, but I wonder how successful he’ll ever be.

This entry was posted in Blogging, Freedom, Guns, Politics. Bookmark the permalink.