So we all know Joan Peterson of the Brady Campaign, and Protect Minnesota (tho she’s been set out to pasture in Minnesota, and the Brady Campaign is doing everything in its power to keep its collective head above water), she had a recent post about how anti-gun bills are stupid bills written by stupid people and because of that they fail and die.

They also fail and die for the same reason why we haven’t got National Reciprocity and Suppressors off the NFA, and why Obama never passed any gun bans….Status quo is ALWAYS more attractive to politicians.

So Sebastian talks about why the bill is going to die, and why Joan is Crazy, but for whatever reason Joan decided to approve a bunch of comments for that post.

Of course the comments are all pro-gun, because Gun control has almost zero support on the ground, and we have so MUCH support that we spill into the anti-gun playgrounds.

There is one consistent thing with the comments and Joan’s responses. She looks at the response, either skims it, or reads it with pure cognitive dissonance, and then responds only to minor minutia with her responses.

The comment that started it all was Joan Saying:

And I’m all in favor of intentionally limiting the lethality of any weapon designed to kill as many people as possible. After all, that is the only reason for those types of assault rifles. They are not necessary for hunting or self defense.

and by “limiting the lethality [sic]” she of course means Australia and UK style confiscation.

But the rest of the comments take issue with her statement that “Assault Rifles” are only for mass killing and not for hunting or self defense.

I have never read an article from a credible source that says that an AR-15 is the gun of choice for self defense. In fact I read the opposite in article after article. You are claiming something that is just not true. In the first place, a gun is rarely used for self defense in the home or in public. That is a fact. Check out this article among just one of many

Let’s have a look at the “Many” reasons why owning an AR-15 is stupid:

1. The AR-15 Was Designed For Military Use

Super scary until you realize that most things were designed for military use. Lots of things like GPS and Cellphones got their start with the military. Most guns got their start or were used by military forced as well.

Nothing but illogical scare tactics.

If you are going to use a gun as your first line of defense, do you want a gun that sprays bullets everywhere in rapid succession? The “assault” part of assault rifle describes the deadliness of the AR-15. In his piece for Slate, Peters noted the AR-15 can fire up to 45 rounds per minute. If you are attempting to use this gun for self-defense if someone is attacking you and your family, it’s not the best move; bullets are going to be flying everywhere, and the potential to hit a family member, a neighbor, a pet, or even yourself seems dangerously high.

Now first up, since this article is written by an anti-gun nut, no “acceptable alternative” is given for home defense. Of course all anti-gun nuts are anti self-defense, but they know that is an insane position so they have gotten away from suggesting victims of violent crime lie down and think of England.

Also the only people who talk about cyclic rate of guns are A) Machine gun people and B) Anti-gun Nuts. I remember a coworker asking what the cyclic rate of an AR-15 is. I have no idea because such a thing is relatively irrelevant, and I said as much.

Of course why antis go so nuts for cyclic rates is this exact fallacy. You’re going to be wasting ammo and spraying indiscriminately if you attempt to defend your life with a gun? Really?

No because you can make VERY rapid follow up shots does not mean you’re going to do it.

Also FYI ballistic tests with 5.56 ammo shows it performs better than pistols and shotguns with wallboard penetration. Just make sure you pick the right ammo for home defense.

One of the reasons that the AR-15 is popular is because it can be endlessly customized — never mind that the ease of customization can lead to owners unwittingly violating state laws. Holding a rifle that can fire 45 rounds per minute is certainly going to make a person feel powerful, but is it actually making them safer? No. The AR-15 is a weapon that gun owners can brag about owning, but its usefulness in self-protection is questionable at best.

No citation on what state law can be violated. I mean here in Mass you could put a folding stock with a pistol grip on your mini-14 or M1A and make an “Assault Weapon”. That’s more an example of how dumb the laws are, not a reason to hate on the AR-15.

Also no citation on why the AR-15 is not useful for home defense, and so far they’re totally full of shit, so I’m not going to just take their word.

Also the customizable nature of the AR-15 is one reason why it’s so popular. You don’t NEED a home defense carbine, and a separate varmint gun, and separate and a separate medium game gun, and a big game gun, and a target rifle ect. Depending on how serious you are about any of those things you might WANT a dedicated rifle in one of those niches, but if your rifle spends 90% of its time sleeping in a gun safe in case of a home invasion, or range trips, but once a year you feel the urge to shoot at deer or varmints, you can quickly and cheaply modify the gun to suit that. Heck with .50 Beowulf and .455 Bushmaster and similar rounds you could be hunting bear with the same gun that protect your house with little more than an upper swap!

Oh and BTW the AR-15 is so insanely popular it really isn’t a gun worth bragging about…everybody has one, it’s not that special unless you’ve done a really good custom job on it.

4. The Odds Of An AR-15 Or Any Gun Being Used For Home Defense Are Low

5. The AR-15 Is Powerful Enough To Pierce Body Armor

Short Short answer: Well yeah, EVERY centerfire rifle round can penetrate police armor. That is assuming A) The officer is wearing armor at all, I still see a LOT of uniformed cops who are OBVIOUSLY not wearing a vest. and B) That we’re talking threat level 2A armor here.

Except that police do indeed sometimes wear higher-threat armor that can stop a 5.56 round. This is even more laughable when you see the image they used 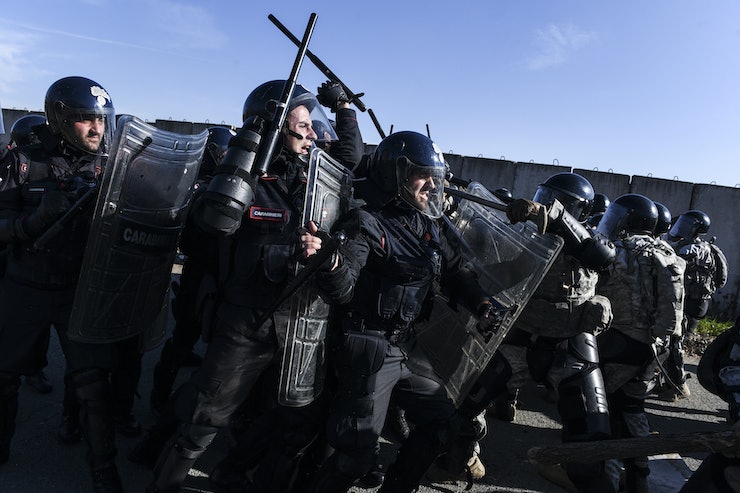 Umm yeah, Riot cops will probably be wearing trauma plates, both for rifle protection but also soft armor doesn’t do much against blades, but hard-plate does.

Last we have one last line from Joan:

This is vastly different than the millions of DGUs claimed by the NRA and gun extremists. It may be closer to what GVA reports. Over a thousand per year. You do understand I assume that compared to 33,000 dead every year from gunshot injuries and 100,000 injured, that number is nothing. More people get killed and injured by those guns used for self defense by a long shot ( sorry for the pun) than are used to protect people.

Except Joan ignores the fact from the comment she’s responding to that the CDC’s lowest estimate (and note that there estimates as high as MILLIONS, that I’m equally skeptical on) is over 100,000 per year.

Its a tough number because most defensive gun uses no shots are fired meaning law enforcement might not record that a gun was even used by the victim, if they record the crime at all, and certainly law enforcement are NOT recording defensive gun uses as a statistic. Still even at the lowball, number, defensive gun uses, and CRIMINAL gun uses are about equal, and it is a VERY easy assumption that just as the 3 million DGU per year number is likely artificially high, the 100,000 number is very likely overly low, so it is more than likely that guns do more good than harm in society….and that’s actively.

But that’s not even the argument Joan is having, that statistic is swatting a fly with a nuclear bomb. All we NEED to prove Joan wrong is show that AR-15s ARE used for self defense, which a simple google search proves. AR-15s are used for hunting….equally as easily. That they aren’t weapons of mass murder…..hence why cops carry them, and use them…and not for mass murder. Oh she also claims that cops carry them for some fictitious arms race between cops with pistols, shotguns and billy clubs up against gangs with assault rifles.

That’s of course bullshit if cops encounter an armed criminal if it isn’t a knife or club, it’s a handgun. Long guns of any kind, be they AR-15, or hunting rifles or shotguns, are rarely used by criminals. Cops carry AR-15s for the same reason we do, they are light, handy, easy to shoot, and much more effective than pistols or shotguns across a VERY wide range of scenarios.

Pistols are still better when you’re just walking a foot beat or writing tickets, but if you need to fight, anybody who can should be going for the rifle.

This entry was posted in DGU, Guns, Politics, Safety, Self Defense. Bookmark the permalink.