Joan Peterson of the Brady Campain, and the Joyce Foundation, can really fit a foot in her mouth.

Odd, I’ve run red lights before (sometimes simply for the fact that yellow light times aren’t standardized other times because I could clearly see I was the only vehicle anywhere near the intersection so I didn’t feel I was accomplishing much by waiting) I’ve only been ticketed once for running a red light, and actually that instance I believe I was in the right, but I was due to head offshore, and I could afford to miss a research trip for a simple court date, so I paid the fine anyway.

I certainly don’t obey the posted speed limits, and its been over 5 years since my last ticket, and my total has been a whopping 3 in my driving career.

I prefer to wear a safety belt, and have been known to buckle up even while parked, but I have driven without my belt fastened before on roads where such behavior is a ticket-able offense. I’ve never been ticketed. I also don’t know anybody else who’s been ticketed for it. As far as I know the only people who DO get this ticket are caught speeding, or with an out light, or some such violation.

Scarier still I think we’re all aware of people who have driven drunk and weren’t caught. And I’m not just talking “had a few”, but “Visibly impaired” people.

And the last one. Well, I saw this scene at work today. 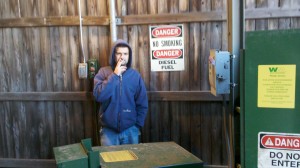 That’s my buddy The Rizz (A great trance and house DJ BTW) having a smoke break.

There was some vague discussion about enforcement rather than the simple laws, I won’t attempt to read Joan’s mind, as I suspect she has none to read. But if she’s simply calling for better enforcement how can you explain the examples in this post? First she mentions the Omaha Mall shooting. Well that case a kid took a Kalashnikov clone rifle from a relative without asking, and took it to a mall that forbids the carrying of weapons, and started shooting people. All of those things are illegal. Now does Joan call for more enforcement, or new laws? Better yet, she gives this bizarre case as a call for more gun control. First up reading a few stories I’m not exactly clear what actually happened. There is a “Shots fired” call, and in the end two cars are found with bullet holes. In between that an Army veteran was shot in his car by police. Frankly with vague details like this I have questions for obvious reasons. Still taking every detail in this story at face value, isn’t this a victory? I mean shooting in a mall parking lot is illegal, and the man was stopped by police. Mission Accomplished?

She openly admits she will only stop when the impossible becomes possible. She’ll stop when gun deaths in America are “O”. (I assume that means Zero..and not a slight on Obama or Oprah) Given that there isn’t a nation in the world that is free from gun death or gun violence, despite some really horrendous slights on gun rights, I think we see where she’s going with this.

0 Responses to Gun Laws Can Work