I Call Her Eleanor

So back in 2008 Jeff Quin wrote a review on a new Subcompact .45 ACP Pocket pistol from Kahr. Go Read his review, I’ll say I’ve bought several guns that I’ve read his reviews for and found them to be right-on. His pictures are also great. When I saw that it was a .45 that was the same size as a J-Frame revolver (the gun I pocket carry as a light gun or a backup) I wanted it.

Of course it isn’t on the bullshit gun “Safety Roster” so acquiring one was a bit difficult (that’ll be another post) but I finally did. 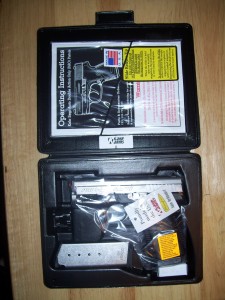 OK so let’s do a review with pictures below the fold!

OK so for starters let’s talk about caliber. I’m not a caliber warrior. “Stopping Power” in pistols is bullshit. I will say right off that the difference between .45 ACP and 9x19mm is academic, and frankly all things being equal the 9×19 is the superior round, and the Kahr P9 is almost the same size, but lighter, thinner, and holds more than the PM45, and the Kahr PM9 is approximately the same size as most pocket .380s.

Now all things are NOT equal, I carry a .45, and I reload .45, and have several .45 caliber pistols. I also happen to prefer the caliber just from years of use. Also I won’t lie, but since this is one of the smallest and lightest .45s on the market I really wanted it.

OK time for another picture! 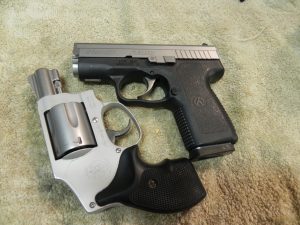 They look about the same size, don’t they? 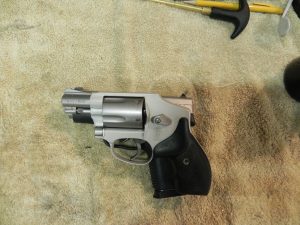 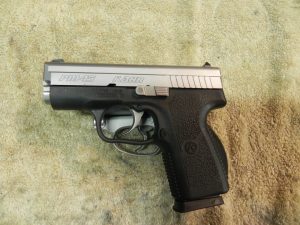 They ARE the same size. Actually according to this PDF and my own observations its a hair shorter than a J-Frame, so overall if you can carry a J-Frame you can carry this Kahr.

OK so now that you have the feel of the gun let’s get the negatives out of the way.

First, the gun is small and light…for a .45 ACP Pocket gun. Loaded with 5+1 shots of 230 grain rounds of .45 ACP it weighs 24oz. When carrying the J-Frame I’ve never forgotten I had a gun in my pocket, but you will certainly be feeling the extra weight of the PM45. Now I find that added heft to not make much difference in the end, but if you’re looking for feather-light maybe you should be looking at the 9×19 and .380 guns.

Also you saw above the standard magazines (the gun comes with two) hold 5 rounds. That means stoked up the gun is a six-shooter. Now the 5-round mag drops into a shirt pocket with ease, but this gun will eat from any .45 kahr mag, so I plan on buying a pair of 7-round magazines in the near future.

Another common complaint is the machining of the rear serrations doesn’t give the fingers enough purchase for easy manipulation of the slide. I don’t agree with this. What IS a problem tho is the recoil spring on this gun is AMAZINGLY stiff. I’ll rack a 1911 with an 18 pound spring all day long, just using a slingshot and brute force…but with this little gun I need to break out the Kathy Jackson big guns. If manipulating a slide is tricky for you this is probably not a good fit for you. Also I generally prefer to pull the slide back on reload rather than hit the slide release. This is mostly because the slide stop on a 1911 is a bit of a reach for me, but in the PM45 its just far enough that I won’t bump it while shooting, but can grab it without shifting my grip on a combat reload. Its a narrow leaver, but I don’t notice the sharpness on this gun that I felt in the early models.

One last complaint is a bit of an odd one. Caleb mentioned that the trigger had a slow reset. He’s right the trigger reset doesn’t have a lot of spring pressure on it, and it resets almost at full extension. This means means you need to come completely off the trigger before initiating your next trigger squeeze. Since I’m coming from a revolver so that’s how I shoot. Also this trigger pull is long. Longer than my J-Frame, so if Length of pull is an issue, take note.

OK from there let’s get to the good stuff. Starting with the trigger. Despite all of the above I LOVE the trigger on this gun. Of all the negatives above, Kahr makes one of my favorite DAO pistol trigger pulls. It has almost no slack and a constant, smooth pull with zero stacking all the way to the clean break. The pull is also quite light, Jeff Quinn measured his at just under 5 pounds. That sounds about right to me, still the pull is long enough that even at that light weight its not going to get accidentally pulled. Also the trigger is a smooth one-peice unit. No secondary switches like on the trigger face of a Glock, or segments like on the M&P series. Just one piece of aluminum that pivots and pushes the trigger bar. The trigger pull also disengages a firing pin block safety.

Now let’s talk size. Its smaller than a J-frame…but it FEELS bigger

With no magazine in the gun most of my pinky has some grip. With the low-profile bumper on the base of the 5-shot mag my pinky has a full rest. Compared to the two-finger hold I get on my J-frame, this is down-right awesome. I find the grip texture to be the perfect mix of offering a good grip without harming hands and clothing.

How’s shooting it? Well its light, and small, and a .45. But with all of that its actually quite comfortable shooting. .45 is a low pressure round so even with all of this you just get a little bit of muzzle flip. Really it feels like shooting an all-steel .357 Magnum, tho I’ve put 200+ rounds through this gun in a single sitting with no ill effects. I think its the pressure of the .45 Cartridge coupled with the heavy spring. BTW I once shot a P40, and I found that gun to be a handful that wanted to twist out of my hand. I don’t much care for .40 S&W for that reason.

Oh and some of those rounds were +P, All Kahr pistols are rated for +P ammo, and my 230 gr +P Federal HSTs run like champs through it without any excessive recoil, so that’s my carry load for all my .45s.

The sights on this model are the base sights which is a bar on the rear sight and a dot on the front, but the sights are dovetailed and can be swapped, as well as Night sights are an option from the factory. I prefer 3-dot style sights, but these are more than adequate and fast to acquire. They’re amazing considering that most guns of this size don’t have full-size sights on them.

One thing you hear a lot about is the Kahr 200 Round break-in period. I have seen every round fed into this gun, and the only malfunctions have been some piss-poor handloads of my making. Current round count to date is 450. This gun runs like a top right out of the box. That’s AWESOME!

Now let’s get into the geeky parts

Here’s the gun torn down. Stripping is easy, given that you can retract the slide to line-up the takedown notches. You’ll see the recoil assembly is a captured nested spring system. You can see the plunger for the firing pin block. Also I assumed the barrel would be the Browning linkless system, but instead its a short-recoil cam-action around a kidney shaped hole under the barrel that the slide-stop pin rides in. This is the same action as in a Colt Mustang or the CZ-75. Lockup is achieved by a large lug engaging the ejection port. 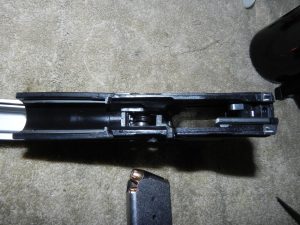 The gun is quite simple a trigger bar rides along the right side of the frame and works a two-cam actuator that unlocks the firing pin, and cocks and release the striker.

The striker action is similar to Glock and many firearms where the striker is partially charged with recoil, and fully cocked by the trigger. 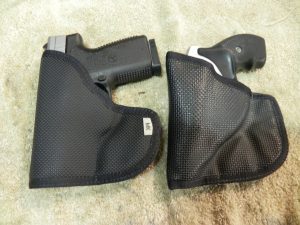 The PM45 model is fairly new still. The broad wing at the muzzle-end of the holster makes the gun print in the pocket like a large wallet.

So there’s my impressions of the PM45. As for the title, this is a gun I’ve wanted for YEARS and it has been just out of my reach. I decided to name her after the Mustang from Gone in 60 Seconds. What’s great is I’m 100% pleased with this gun. I have no intentions of selling my S&W642 because there are still times when having a revolver is quite useful, but overall I have just traded a 5-shot .38 revolver for a 6-shot .45 pistol that’s the same size, and while the .38 hurts my hand when I shoot it, the .45 isn’t much more of a challenge from a full-size gun.

Really its a thing of beauty. Well worth the wait and trouble!

0 Responses to I Call Her Eleanor