A few months ago I picked up a CRKT Ultima a Knifecenter.com FYI if you’re interested in this unit, its discontinued, tho they still make the smaller size.

I talked about it here on how little I used it, and what a shame that was.

Well then we got a new dehumidifier which came in a big heavy double-walled cardboard box. I decided to hack up that box and Damn the big heavy blade with a razor sharp edge worked like a charm. So when Vector got his daughter a swing set and had a HUGE collection of big sturdy shipping boxes in his basement I decided to haul over my Ultima and give it a go. 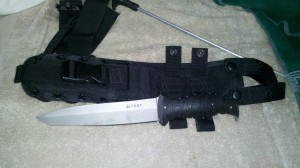 OK so for transporting it I stuck it in the provided sheath. OK CRKT, here’s my big complaint. You made a nice fighting/survival knife, and then you go and ship it with this huge ninja-bait dropleg sheath. The knife is big, its HUGE in this bulky thing. You couldn’t have just made a simple belt sheath?

OK so onto the knife. There was a ton of cardboard and over the course of the cutting the blade held up well. It was showing signs of dullness towards the end. This wasn’t unreasonable, but it did seem a might sooner than other utility knives I use. I’ve heard this is on account of the Ultima using softer steel to better resist chipping and breaking under heavy use. Still softer steel means shorter edge life, but quicker sharpening. When I got home I slapped it on a ceramic stone a few times and it quickly returned to a razor’s edge. I imagine in the field if you had a piece of steel or the back of another knife you could probably strop a reasonable edge back with little effort.

Now the handle is bit of wonder there. It feels VERY comfortable when holding it, but the moment the knife starts to slide out of your hand it digs in and you get your grip back VERY aggressively. Overall this is comfortable both physically and in your confidence in your grip. Tho by the end of the session my hand was a bit raw. This is definitely a hard-use knife, not a hobby knife. This is the type of knife I wouldn’t mind using around the camp fire or on the deck of a rolling boat, but not something I’d want to use all day cutting brush as I imagine my hand might be REALLY raw. I will also note that I dislike those heavily checkered guns that are en-vogue these days as they’re uncomfortable in my hands, so maybe its just how my hands roll.

Oh and one more thing, note at the end of the blade tang CRKT put in a prying tool. That’s a good idea! First you’ll be less likely to use the blade to pry things, and also you have a bottle opener opposite a razor sharp knife! What’s the worst that could happen?

Seriously its a really nice knife! Check it out!