I first talked about it here. Now it’s showing up in my area. 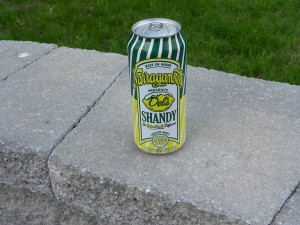 Like JUST showing up! A few people at work had them, so I decided to go out and look for some. At the store I knew I’d have the best chance of finding it, I looked around and couldn’t find any. So I asked, and they were JUST unloading the truck and one of the staff personally grabbed me a six pack.

This stuff is really neat, it’s kinda like a Corona with a lemon in it, but sweeter. One could get used to this. Also since they used concentrate it’s still 5% alcohol (I suspect they might have also fortified it) but it’s exactly what you’d expect, beer with lemonade flavor, and they did it right.

Also it comes in 16oz cans which I like. Further because I’m a scientist and you can’t turn that off, I poured a little into a glass to see what color this stuff is. Now Narragansett Larger is a light brown color (not sure what color their summer ale is), this stuff is the EXACT color of any of the mass produced ales and pilsners.

I’m sure you need to be fairly close to Rhode Island to find this stuff, but if you are, give it a try. Even my wife, who was noticeably creeped out by the idea liked it.

This entry was posted in Food, product review. Bookmark the permalink.