The GOAL Rally on the State House

Just got back! First up, the Rally was AMAZING! It will be difficult for the politicians to ignore that!

So for starters I went in with my family, Mrs. Weer’d and LaWeer’da went to the Boston Children’s Museum, and I headed up to Beacon hill.

I’m a prompt man, and actually had my wife drop me off a few blocks from where she parked so I could get there well before the rally started….as I was coming up Beacon Street I could already hear the Rally. 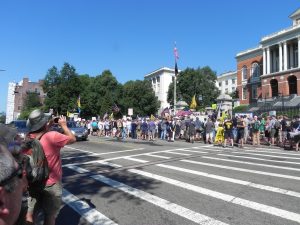 This is at 9:45 for a 10:00 rally! And people were already speaking, I believe the early start was because several members of the Mass Legislature wanted to speak before a 10am call.

Oh and it was on BOTH sides of Beacon Street. 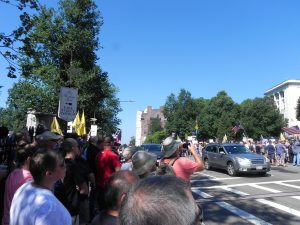 This is again BEFORE the Rally, as things went into full swing it looked more like this. 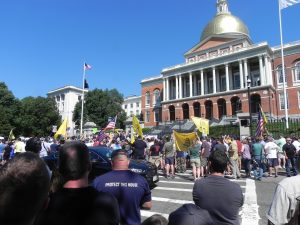 I’m not a good judge of crowds, but It was over 1,000 just from my counting. Also note it was 90 degrees out there! Us New Englanders don’t do well in the heat, but we bear it when we need to!

The Police closed down one lane of Beacon Street to make room for us, and we got a lot of support from passing cars. Also seemed like every commercial vehicle that passed was honking and giving us the Thumbs up.

Wish my pictures could do it justice, but the Capital is on the summit of Beacon hill, so everything else is below it. Jim Wallace of GOAL took some pictures from the steps which will probably show the scale even better.

Oh and Fox 25 Boston was right across the street, so they got some coverage up.

Hopefully this nonsense will resolve quickly.

**UPDATE** Just found a great video of the Rally from the other side that shows the scale MUCH better.

5 Responses to The GOAL Rally on the State House