I know, never feed the trolls, but I’m curious where this will go.

In the comments of this thread one of the anti-gun acolytes claimed the NRA had a lack of younger members, nor Women, blacks or Hispanics. I’ll admit the Black and Hispanic membership still needs work, but the numbers are on the rise. So I called out Dorothy on her lies.

Like a true Misogynist Mike decides she can’t defend her own lies, so he comes in with this:

Did you attend the meeting? Record-breaking? Who said that. The NRA PR Department?

I did attend the meeting, and noted there was no evidence that Mike did, and that the NRA keept detailed records of their attendance
as all people entering the show or meeting needed to have a show badge, so if in fact they were lying it would be a pretty big blunder.

You didn’t see me at the show? And this proves anything? Why should I believe what the NRA says about its own attendance? Oh, I forgot. Trump’s inauguration had the highest attendance of any inauguration. And by the way, if a gun-control organization held a big meeting and said that they had whatever attendance number I wouldn’t believe them either.
Getting a crowd to a gun show in Texas is nothing, okay? And does the NRA count unique attendance or just add up the turnstile count each day? Who knows? And let’s say that they did have a record-breaking attendance. That doesn’t prove anything either way about whether Dorothy’s statements were true or not.
Want to criticize Dorothy for saying things that aren’t true> Then have the courtesy to respond directly to what she said and don’t indulge yourself in throwing up something totally irrelevant like attendance at an NRA show as if this ‘proves’ that Dorothy’s comments were incorrect.

Note there’s no facts given to show I’ve told a lie, and I was actually there, and Mike Wasn’t. I did link Lawdawg who noted exactly what I did

The average age of the attendees is younger than in the past conventions, and fitter. While I’m still navigating around wheezing late-middle-aged gentlemen, there are a lot more fit, squared-away folks.

Is the NRA sponsoring a Crossfit club, or something?

Also, there are more un-accompanied women. At the other NRAAMs I’ve been to, the majority of the lady attendees are obviously there with the Boyfriend /Husband /Spouse-Like Love Unit. While most of them still are, there are a lot more moving around the floor by themselves — including at least two ladies standing in line at booths with strollers in tow.

I also didn’t link the live show I did from Dallas, but here it is, where I also talked about the demographics and attendance.

So after that….nothing, and after 3 days I posted this link just to show the embarrassing tactic of anti-gunners to never admit defeat no matter how badly they’re licked….and if you simply disappear, you can claim plausible deniability.

Now comes the cowardice, this morning Mike emails me, and claims I called people a liar and supplied no evidence. Interesting that he’s claiming this while evidence is supplied AND he’s lying, and he threatened to ban me “again” from his blog (I suspect he just bans my IP and when my IP renews suddenly I can comment again)

I noted the evidence I cited, and the lies he implied, and told him to quit being a blowhard.

So he doubled down.

You want to tell me what ‘evidence’ you have here? And you go into the show as ‘press.’ That’s a good one.

You’re a Benefactor Life Patriot member? Prove it big shot. Put a pic of your certificate online like the way mine is online. 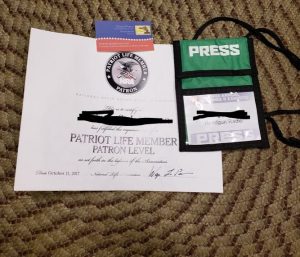 Personal information redacted be as we have seen here and here Mike is a dishonest person with boundary issues, and I’m sure he wants to use this information to cross some social lines.

Still that’s my business card, that’s the same rug most of my gun pics are shot on, and there are only two hosts for Handgun Radio, and Ryan Michad wasn’t able to make it.

So there you go, Mike now has 24 hours to show me his badge from, or in fact he’s a fucking liar.

Goodbye and good riddance (again.) Sand when you go to the library and use another computer with a different IP address I’ll ban you again.

Nope, you’re blocking me because I caught you in a lie, and you’re cooking up another lie to cover for it.

If the gun control agenda was indeed righteous, then why do they all lie so much?

And in this case over petty crap.

They lie ALL the time, compulsively!

This entry was posted in Guns, Random. Bookmark the permalink.